Infilled Trench on the Shore of Lacus Veris 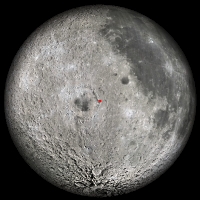 The lower-right half of this image is the relatively rough surface of the basin wall. The smoother part in the upper left corresponds to the mare basalt deposit that extends ina  north-south direction (see WAC context image at the bottom of this post).

Just below in the NAC context image, there is a trench on the mare surface about 650 meters in width. The slope materials slid down the trench, resulting in a sharp distal edge.

Determining the origin of this trench is not easy from this image alone, but it must have been formed after mare basalt was deposited as a flat surface. Later material from the wall slid downslope and partially covered the bottom of the trench.

Small slumps of highland material overlying the edge of mare are common on the Moon. Since the mare were deposited as very fluid magma, the lava's extent was confined by pre-existing highland topography. Similar to how hills and mountains confine lakes on the Earth. Back to the Moon, over time the confining highland hills slump and slide onto the mare, slowly blurring the highland-mare boundary. In this case older material ends up on top of younger material (reverse stratigraphy). Of course the slump deposit itself is younger, however the age of the rocks and soil particles that make up the slide are older than the age of the mare basalts. We do not know the exact process and the timescale of such slope degradations. How was the slide triggered? Perhaps slide is not the best term. It may be that very slowly over time individuals particles are moved downslope (creep) by the extreme night-to-day temperature swings on the Moon. Or perhaps a true landslide was triggered by a nearby impact event that set off moonquakes. A geologist on the ground could collect small-scale measurements and determine the exact cause, or causes (perhaps both mechanisms were at work). Such analyses will be important as future explorers determine the best places to build structures and roads.

Explore the sharp slope edges invading the trench and other features in full NAC frame yourself, HERE.