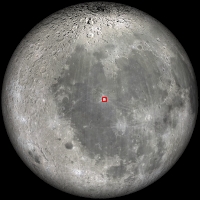 Aristarchus crater, one of many fascinating exploration destinations on the Moon: young, highly reflective, rugged, and colorful! Look at the shades of grey in the small central peak, an inviting tapestry of geologic diversity!

Looking up and over to the east, on the steep walls of the crater, observe the streaks marking ejecta leaving the crater. The shades of grey in the streaks likely trace back to the diverse stratigraphy seen in the central peak. Imagine a future lunar explorer traversing around the base of the 300 meter tall central peak while collecting samples. There are at least three different distinct shades of grey seen on the steep slopes, perhaps more? Though climbing to the top and walking the ridge would afford a magnificent view, simply collecting rocks along the base would suffice from a geologic viewpoint.

The next logical step is to collect samples along the east and southeast wall of the crater. Do the distinct rays seen trace back to the layers seen in the central peak? What about the enigmatic reddish brown material just on the southeast flank? The geology of the Moon is rich and complicated!

From LROC WAC color images you can see that the gray streaks show up as distinct color anomalies, color due to variations in rock type. The area has long been known to be among the reddest spots on the Moon - meaning its reflectance strongly increases from short to long wavelengths. In the WAC color image below, you can see the distinct red-hued region, which is largely blanketed by the glass-rich products of explosive volcanic eruptions. This area is surrounded by bluer terrain, which formed when titanium-rich (at least it is thought that titanium is in these rocks) lava flowed across the surface and flooded the area, forming a portion of Oceanus Procellarum. In both of the WAC context images, you can see Vallis Schröteri, a canyon-like feature known as a sinuous rille, through which the lava once flowed.

At the intersection of this amazingly diverse region, the Aristarchus impact event gives us a three-dimensional look into the plateau. The central peak of Aristarchus, which uplifted material from great depth, is thought to in part sample the anorthositic material that makes up the lunar highlands, and portions of the southeastern wall and rim, which are seen in today's oblique NAC view of the crater, are thought to be rich in olivine.

The bounty of geologic processes that came together to produce this complex region makes it a high-priority target for future exploration. The geologic interest is not the end of the story. Pyroclastic deposits there may contain valuable resources to be mined by future explorers.