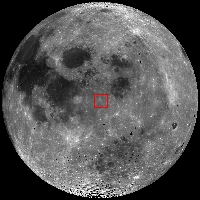 Today's Featured Image shows impact melt flows near the outer rim of the crater La Pérouse A (4.08 km in diameter, 9.268°S, 74.705°E). Distinct channels and flow lobes are visible within this area. Small channels and levees are visible along the edges of some of the individual flows. As the melt moved farther away from the crater rim (the crater rim is toward the top of the image), the melt cooled. At the end of each flow lies a deposit of impact melt material. More impact melt may have been emplaced around the rim of the crater, but the landslide of highland material could have destroyed it.

The crater La Pérouse A is a very young satellite crater of the larger (80.4 km diameter) La Pérouse crater group, named after the French explorer Jean Francois de Galoup, known as Comte De La Pérouse. The Comte De La Pérouse sent his expedition journals and charts back to Europe shortly before he and his expedition disappeared. If he hadn't sent this information back, he probably wouldn't have a lunar crater named after him, since later on the shipwrecks of his two boats were found in Oceania.