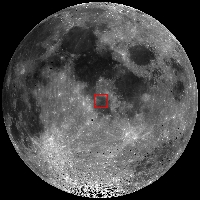 Today's Featured Image was chosen to showcase the extraordinary range in surface textures and albedo possible within a small area (half a kilometer square) on the Moon.

Prior to Narrow Angle Camera (NAC) imaging, the low-reflectance wedge along the southern rim was generally regarded to be an impact exclusion zone. Such a zone results when a bolide on a low-angle trajectory produces a heterogeneous energy distribution that unevenly deposits its excavated ejecta. The reason for assuming this can be seen in the Wide Angle Camera (WAC) mosaic image below (two frames down), where a prominent wedge shape is visible.

At the NAC scale, however, it is clear that low-albedo material has cascaded into the crater. This then became juxtaposed with blocky debris on the crater floor with patches of fine-grained deposits intermixed. Is the wedge-shaped ejecta truly the result of an uneven energy distribution, or was ejecta simply darker in the southern direction -- perhaps resulting from a buried layer of darker deposits exposed and ejected by the blast? What clues could help us resolve the question? A geologist explorer on the ground would be tempted to draft a map of these different deposits. Would such a map be useful for finalizing our conclusions?

Also, before the Narrow Angle Camera captured these images, it was unknown whether the dark material was a dry debris flow or impact melt. What about the NAC image allowed us to solve this puzzle with confidence?

Click HERE to explore the full NAC image frame. Other examples of recent impacts can be found in Ejecta Starburst, Recent Impact in Oceanus Procellarum, and Rubble Pile on Fresh Crater Floor.
Posted by Joel Raupe at 8:18 PM