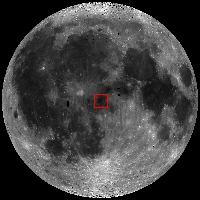 The pyroclastic Southern Sinus Aestuum (5.42°N, 351.36°E) is famous for extensive dark mantle deposits (DMD), materials which have the lowest albedo (or highest optical maturity, or 'OMAT') on the Moon.

The DMD were likely formed as explosive eruptions threw out a blanket of small particles (pyroclasts).

Today's Featured Image shows a portion of unnamed crater rim located inside this DMD unit, about 2.4 km in diameter, with 4 or 5 dark streaks on its slope (see the crater's full profile in the NAC mosaic below).

The opening image highlights one of the sources for a dark streak. The right half of the image is the crater wall, and the left half is the surrounding flat area. The streak originates at nearly the top portion of the crater wall and extends down the slope. Notice that the streak is darker than the surrounding flat area some buried low reflectance materials were exposed on the middle of the slope and slid downhill.

Actually, the albedo around this unnamed crater is not as low as the main DMD area. The contrast is very, small but you can see a slightly higher albedo halo around the crater in the WAC context image. The dark streaks inside this crater all originate from almost the same level of the crater wall. Probably this unnamed crater excavated higher reflectance bedrock under the DMD, and spread it around the crater. Then the pyroclastic materials exposed in the wall (sandwiched between the bedrock and the ejecta) slumped down the crater wall leaving the dark streaks.

Careful investigations of the craters in the DMD by NAC images are quite useful to understand the thickness, the volume, and formation process of DMD. More and more NAC observations of DMD are expected.


Explore this pyroclastic slides by full NAC frame yourself, HERE.