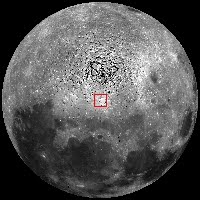 Impact melt drastically altered the landscape in and surrounding Anaxagoras crater (73.458°N, 349.934°E, ~52 km diameter). Previous Featured Images focused on the interior melt pond and melt-covered mounds, but the exterior ponds are important, too. Impact crater formation is violent: all of the energy associated with a moving bolide is imparted to the target immediately upon impact. Some of the energy may vaporize the impactor, while a substantial amount of the energy is responsible for excavating the crater cavity. In many cases, some of the target rocks are heated to their melting temperatures (~1300°C for basalt, ~1500°C for anorthosite) to form impact melt. Once formed, impact melt may be excavated in a similar manner to unconsolidated ejecta. Some melt remains in the crater interior, pooled on the crater floor and terraces and forming a veneer on the crater walls, while some melt is emplaced on or near the crater rim. Similar to the crater interior, the immediate exterior of the crater may be veneered with impact melt and exhibit melt channels and flows, as well as exterior melt ponds.

The opening image by itself might be mistaken for a smooth mare region because there was enough impact melt to coalesce into a pond and evenly bury the underlying surface, but the WAC context image (above) shows this not to be the case everywhere. On the flanks of the eastern rim of Anaxagoras, the melt pond is very smooth in some areas (opening image, left) while relatively rougher elsewhere (opening image, right), which may indicate that this melt pond did not have enough volume to completely obscure the preexisting surface. In the very smooth portion, there are some fractures similar to those observed in other melt ponds. There are also several impact craters with irregular morphologies. These craters, all less than 100 m in diameter, may have these different morphologies for several reasons related to target properties. The 94 m diameter crater in the upper right may be irregular because the crater punched through a thin resistant layer of impact melt rock to the looser unconsolidated preexisting surface. Other nearby craters may have formed in partially molten melt or may have formed much later, after a thin layer of regolith was generated by micrometeorites. Additional study of superposed crater morphology on impact melt, paired with analog laboratory experiments, may help distinguish the difference between impacts into a partially molten material and those into a layered target (previously studied in depth by Drs. Oberbeck and Quaide, among others).

What do you think?  Take some time to examine the exterior impact melt ponds in the full LROC NAC image, HERE.