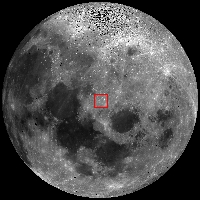 Impact melt forms in most impacts on the Moon. The melt shown here was emplaced during the impact event that produced Newcomb crater (29.76° N, 43.67° E). Rather than producing a melt pond or flow in this location, the melt here formed a thin veneer that cooled and formed a rigid crust. The melt veneer is now identifiable thanks to a thin scarp along its margin with boulders breaking from it. Two cracks split a small crater on the melt veneer, indicating the crater formed after the melt solidified.

A larger crater is less pronounced, so perhaps it was covered by the melt as it was deposited. But how was this thin deposit of melt originally emplaced?

Most impact melt normally stays inside a crater, forming flows and ponds on terraces, and resulting in flat floors. Often, a small portion of the melt is sloshed out of the crater and forms spectacular forms on the ejecta blanket. Some of the ejected melt flows down the flanks until it finds a depression and pond. But not all of the melt makes it to the depression as some melt solidifies on the slope. The result is a thin film of impact melt covering the shallow slopes of the crater flank, like we see in the today's Featured Image!

Explore more impact melt, inside and outside Newcomb, crater in the full LROC NAC frame, HERE.