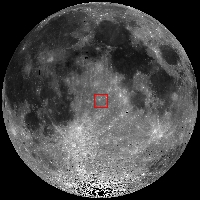 The lighting in the image and the circular appearance of the boulder may initially fool the human eye into interpreting this feature as a crater. However, there are several important clues in the image which clearly indicate that we are indeed looking at a boulder. Click on the image for a full resolution version. First, notice the other smaller boulders in the image. These are identified as boulders because they are irregular in shape, and relatively higher reflectance compared to the surrounding impact melt. Next, look at the direction of the shadows of the boulders. The boulders are all positive topographic features and cast shadows in the same direction. In contrast, a crater is a negative topographic feature. Looking at the full resolution version of the Featured Image shows many small craters in the surrounding impact melt. Look at these craters and compare them to the boulders until your eyes interpret the boulders as topographic highs and the craters as lows. If you still have difficulty, pick up your laptop and rotate the image 180 degrees (rotating your head might be more convenient).

This field of boulders is located on the eastern side of the crater Abulfeda E, a Copernican-aged crater in the highlands, located at 16.769°S, 10.141°E and is 5.6 km in diameter. Many other large boulders are scattered around in the impact melt deposits surrounding the crater. Some of the boulders are partially buried by impact melt and debris.

Related Posts:
"Boulder 668" at Descartes C
If you were an Astronaut, would you land here?
Weaving boulder trails on the Moon
Boulder on the Edge
Sunset Boulder