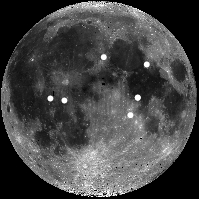 The most common questions to the LROC team before launch concerned what will we see at the Apollo sites? Will we see the Lunar Module descent stage and rovers? What about rover tracks, or the American flags? As we now know, the NAC images clearly show all of the above items (see links to earlier posts at the bottom). Personally I was a bit surprised that the flags survived the harsh ultraviolet light and temperatures of the lunar surface, but they did.

What they look like is another question (badly faded?). Much has been written about the Apollo flags, a comprehensive summary is available at the Apollo Lunar Surface Journal.

The opening image was taken early in the mission, and is one of the best views of the American flag because the spacecraft was pointed towards the illuminated side of the flag, and Sun was low enough (56° incidence angle) such that distinct shadows were cast.


From the LROC images it is now certain that the American flags are still standing and casting shadows at all of the sites, except Apollo 11. Astronaut Buzz Aldrin reported that the flag was blown over by the exhaust from the ascent engine during liftoff of Apollo 11, and it looks like he was correct! The most convincing way to see that the flags are still there, is to view a time series of LROC images taken at different times of day, and watch the shadow circle the flag (see movie below; the flag is just above the LM descent stage).

Just curious, has LROC found any of the impact sites of jettisoned LEM ascent modules?

Samuel Lawrence at Arizona State assures me a long-anticipated and updated comprehensive list of cataloged and confirmed artifacts, cross-referenced with their observation and coordinates, and originally published April 5, 2010, will be updated later "this summer."

We continue to search for Apollo 17's published impact, west of, on, or south of South Massif, but may be frustrated for reasons similar to the conditions we've encountered while searching for Kaguya's very well-documented and timed 2009 impact. Specifically, the most likely impact site for Kaguya seems to be on a steep slope, a south-facing crater wall. The easiest indicators of a fresh impact, if true, appear to have been subsequently covered by a landslide.

So, we eagerly await an updated "Lawrence List," and find the delays in going out on limb quite understandable.

Dr. Lawrence's original list, by the way, is still at the following link:

(We also incautiously staked a claim last December for having located the elusive, historic and very small Luna 9 vehicle, and we're prepared to stand by that, until humiliated.)