LROC captured this spectacular view of the heart of Copernicus crater just before (local) sunset, July, 11 2012. Compare it to the reverse view point snapped from the East near local sunrise, May 5.

Between May and July LRO passed over the terminator (boundary between night and day) and thus the direction to the Sun reversed, in terms of LRO. On that orbit the daylight side switched from one side of the Moon to the other, at least from the perspective of the spacecraft. For example if LROC had just completed mapping the nearside, as it crossed the terminator we skip the farside and start remapping the nearside! 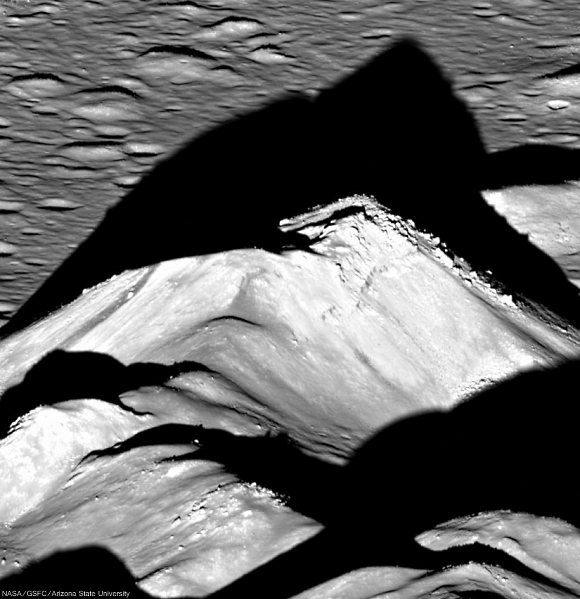 Back to Copernicus, what are those dark streaks we see on the peak? In the comparison image above, and if you skip back to the earlier post that shows the other side, that dark streak is seen on both sides of the central peak, showing that it is three dimensional within the peak. Might it be a dark rock intruded as a dike into the light colored crystalline bedrock that was brought up from beneath the deepest part of the transient cavity in the Copernicus target? Or is it simply a dark rock that is eroding and slumping down the sides of the peak?


Because of their state of preservation (despite being nearly a billion years old) and the identification of scientifically interesting mineralogy from remote sensing spectroscopy, the central peaks of Copernicus have long been coveted by lunar explorers as a prime location for a mission, including sample return. In fact, Copernicus was considered as an Apollo landing site, and was recently proposed as a target for a robotic rover within the Discovery program. To sample the peak you wouldn't need to scale the slopes - in the top image you can see many rocks and boulders that have rolled down from the summit, lying on the relatively flat floor waiting to be picked up.


When and how will we first visit this fascinating, geologically rich area? Imagine the view astronauts will have as they descend to the floor and then step out at the base of this peak. Explore the full LROC NAC oblique mosaic release, HERE.