The Spirit of the Lunar Orbiters lives in LOIRP 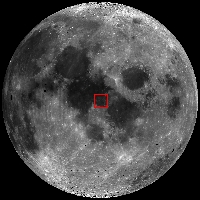 In addition to the five spacecraft the United States presently has in lunar orbit, the legacies left behind by the five Lunar Orbiter spacecraft dispatched in 1966 and 1967, ahead of the manned Apollo landings, collectively amount to a sixth mission, still active and present in more than spirit. Because of the vision and resourcefulness of a special group of engineers and scientists the original tapes containing the raw radio signal returned by the Lunar Orbiters is methodically being processed, essentially for the first time, almost fifty years later. The most recent release of frames originally photographed by Lunar Orbiter II late in 1966 provide us with an easy demonstration of where this growing new library of half-century-old observations fits into our 21st century understanding of the Moon.

Much of the area in the three Lunar Orbiter II high-resolution photographs was surveyed at least once, under a high angle of illumination (80.7°) at slightly better than 1 meter resolution, December 21, 2009. The upper right hand portion of Lunar Orbiter frame 2013 (h2) is also available in the body of Lunar Reconnaissance Orbiter Camera high-resolution Narrow Angle Camera (NAC) observations presently released to the Planetary Data System.
The story behind the recovery and retrieval of Lunar Orbiter photography is pretty amazing. The precision design of the spacecraft and their cameras - designed to shoot simultaneous images on film, to then develop that film and televised the result back to Earth - through to the 21st century story labor of love behind how unique and original tapes were housed in a former McDonalds and the nearly extinct drives and software needed even to begin reading those rediscovered tapes were brought online reads like a detective story. The result has been  to retrieve images at a quality better than any that had been available for decades, and a virtual sixth mission to complement the present-day 21st century flotilla now in orbit (after a very long drought).

The "older" photography can be used for a variety of important purposes, but in the context of the robust LRO photographic survey, now beginning an unprecedented third year in lunar orbit, no price can be placed on the opportunity to search out the rate of new impacts among the slow changes in the lunar landscape over five decades. And despite its clear strengths as a marvel of engineering and on-time, on budget performance, even the LRO will not be capable of surveying the entire lunar surface at high-resolution (though, so far, the LROC team surveyed much more than half). The release of newly retrieved Lunar Orbiter images. like these "fresh" from 1966, fills some of those gaps nicely, and also provides the opportunity to see the same area of the Moon at high resolution under different lighting conditions.

Meanwhile, the LROC Wide Angle Camera has been able to survey the entire visible lunar surface under a variety of lighting conditions at an extraordinary "medium" resolution.

The original and latter history of the Lunar Orbiter legacy amounts to a heroic story, one made possible by forward-thinking scientists like Gene Shoemaker, and thoughtful people who might have tossed the tapes but instead carefully packed them. Their rediscovery and the dedicated people who rebuilt the capacity to read those tapes makes for interesting reading as well. It also provides us with a lesson about the transitory nature of magnetic and digital media.

If these photos of NASA's Lunar Orbiter Image Recovery Project look suspiciously like they might actually have been taken inside an abandoned McDonalds ... well, that's very observant of you. All of those film canisters you see in the first image are actually spools of 70mm magnetic tape containing the analog originals of images taken by the Lunar Orbiter spacecraft in 1966 and 1967. After sitting in storage for decades—most notably in a barn in California—the tapes were brought to the NASA Ames Research Center in 2007. Since then, some of the originals have been digitized and preserved. (There's a good chance you saw a few in 2008, when the first preserved images were released.) Others are still in process. There's not much funding for this type of work, and it can get expensive, as it involves maintaining extremely rare FR-900 tape drives.

Read the entire post at boingboing.net
Posted by Joel Raupe at 1:14 PM