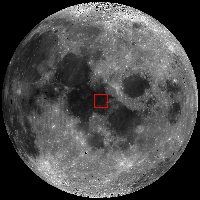 There are many tectonic features on the Moon, although most are wrinkle ridges (thrust faults). Normal faults, where one block drops down against another, are relatively rare on the Moon (but are common on the Earth).

However, there are a couple of spectacular examples of giant normal fault scarps cutting across the mare; Rupes Cauchy is one, Rupes Recta is another.

Note that there are not many boulders piled up at the base of the slope. This paucity suggests that once exposed, the boulders are destroyed in place by micrometeorite bombardment before they have a chance to roll downhill.

The broad mare plains to the southwest are 300 m lower relative to the plains to the northeast (Figure 3 and 4). Along its length, the height of the scarp varies, eventually disappearing at the ends, and in a few places the scarp breaks into two strands forming a pair of steps (Figure 2). The slope of the scarp is around 15°, which is considerably shallower than what would be expected for the dip of a typical normal fault (~60°). Probably the scarp was originally steeper, but over time micrometeoroid bombardment of the surface moved material off the scarp and reduced its slope. The fact that there are many degraded small craters at the top and bottom of the scarp is consistent with an old age.

A second tectonic feature parallels the Rupes, about 40-50 km to the northeast. This feature, Rima Cauchy, is an en echelon graben (i.e., a graben system that is formed by individual segments that are offset from one another). Both Rupes Cauchy and Rima Cauchy are the result of tensional / extensional stresses. In the case of Rupes Cauchy, a single giant fault formed; in the case of Rima Cauchy, two faults (facing each other) formed and dropped a narrow block between them.

A WAC digital elevation model (WAC DEM) of the area shows the dramatic topography (Figure 4). The abrupt change in elevation along the scarp is clearly seen, as well as the craters Cauchy, Cauchy D to the northeast, and Zähringer to the southeast. Compare the WAC image and the DEM (Figures 3 and 4).