The Moon, unlike Earth, has no global magnetic field but many surface locales of limited extent (tens of kilometers across) are magnetized.  In many instances, these small areas of high magnetic intensity are associated with unusual patterns of surface brightness (albedo, or degree of reflectance) that occur in curved, blotchy or other strange “swirl-like” shapes.  First observed by telescope, lunar scientists have been puzzled by the possible origin of what they imaginatively named “swirls.”

An example of a lunar swirl is a feature named Reiner γ (pronounced “Reiner gamma”), a bright splotch in southern Oceanus Procellarum, the dark mare region of the western near side.  The name indicates that initially this feature was thought to be an isolated peak of highland material that juts up through the mare (lowercase Greek letters were assigned to such prominences in the old nomenclature.)  However, even at very low sun elevations, close examination shows that this bright patch does not cast a shadow.  It is simply a bright patch on the surface, one with diffuse and nebulous edges, yet clearly more reflective than the surrounding dark mare material.  It does not appear to be associated with any crater or other surface feature.  It’s as though someone smudged a finished painting of the lunar surface.

During later Apollo missions, orbiting vehicles released “sub-satellites” (small spacecraft that continued to orbit the Moon long after the crews had left for home) carrying instruments to measure the Moon’s magnetic field.  Interestingly, they found a very strong magnetic field enhancement around the Reiner γ feature.  Moreover, numerous other swirls were found elsewhere on the Moon, especially on the floor of the huge South Pole-Aitken (SPA) basin in Mare Ingenii on the far side, and on the eastern limb of the Moon near Mare Marginis.  Each newly seen swirl was found to be associated with a magnetic anomaly.  However, the converse statement is not true – not all magnetic anomalies have associated swirls.

Two principal models emerged to explain these relations.  One model held that the swirls and the magnetism were contemporaneous – the swirls were surficial deposits caused by the scouring of the surface during the impact of a comet.  In this model, the cometary coma (i.e., the dense gaseous “atmosphere” surrounding the icy nucleus) struck the Moon at high velocity, scouring the surface and increasing its brightness while at the same time embedding the soil with a strong magnetic field caused by the creation of an impact-generated plasma (high temperature, low density matter).

The other model suggested that the magnetic anomalies pre-dated and were the cause of the swirls.  The lunar surface darkens and becomes redder with time owing to exposure to the solar wind (the stream of energetic particles – mostly protons – from the Sun).  Strong, localized magnetic fields serve as protective “bubbles” that caused the incident solar wind to flow around these tiny areas, darkening the edges of the field bubbles with enhanced flow but preserving the inner zones (which were shielded from the solar wind) as bright patches.  Thus, the bright parts of the swirls are areas that have not undergone “weathering” by the solar wind while the dark parts are zones that have experienced excessive space weathering.

It remained uncertain whether this postulated “magnetic bubble” effect would actually work but recent experiments suggest that these bubbles might well operate on the Moon.  Scientists from the UK’s Rutherford Appleton Laboratory, creating a “solar wind tunnel” to observe the interactions of streaming plasma and confined magnetic bubbles, successfully produced a magnetic bubble under simulated space conditions.  They have compared the flow field around the laboratory magnetic bubble with the observations from orbiting spacecraft of lunar surface magnetism and find that the solar wind would be diverted around these magnetic anomalies on the Moon.  If solar wind darkening is the primary process that darkens the surface, we may have an explanation for the creation of the bright swirls. 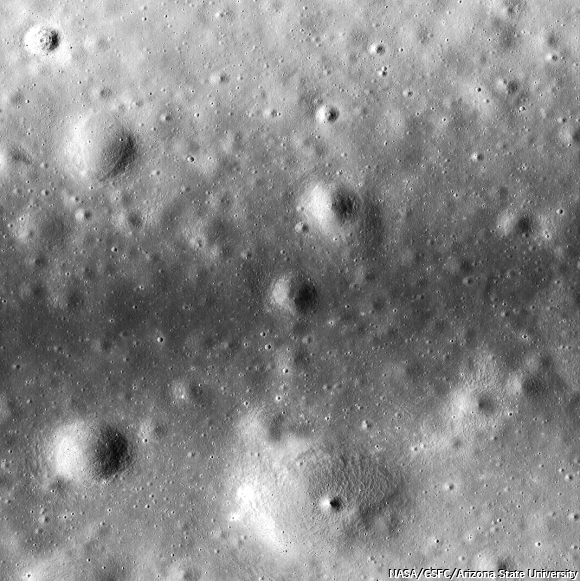 The astute reader will note that while this bubble model might account for the origin of the swirls, it begs the question about what caused the magnetic field anomalies in the first place.  That remains a mystery.  It was noted many years ago by my colleague Lon Hood of the University of Arizona that many of the magnetic anomalies on the Moon are at the antipodes (i.e., 180° away from the center) of some of the youngest, large impact basins on the Moon.  The largest concentration of both surface magnetic anomalies and swirls are on the floor of the large SPA basin, near Mare Ingenii on the lunar far side.  This area is directly antipodal to the large, young Imbrium basin on the near side.  Likewise, the Mare Marginis swirls and magnetic fields are antipodal to the Orientale basin on the western limb (the last of the large lunar multi-ring impact basins).  Furthermore, as basins tend to cover the entire Moon, one can find a basin near the antipodes of almost any given feature (note well: the swirl that started all this hubbub, Reiner γ, isn’t antipodal to anything in particular).  But an even more significant issue is that while the basin antipodal association of many swirls is intriguing, it does not explain why we should see a zone of enhanced magnetization at such locations.  Igneous intrusion, concentration of impact-generated plasmas and converging ballistic ejecta have all been proposed but no specific mechanism seems to emerge as the magnetic field creating event.

We are left with a continuing and highly unsatisfactory situation – a possible explanation for the development of surface swirls on the Moon and of their association with magnetic field bubbles, but we still don’t understand the origins of these fields, the cause of their shapes and intensities and how they fit into the continually vexing problem of lunar magnetism in general.  Two steps forward and one step back.   Lunar science marches on.

Originally published at his Smithsonian Air & Space blog The Once and Future Moon, Dr. Spudis is a senior staff scientist at the Lunar and Planetary Institute. The opinions expressed are those of the author and are better informed than average.
Posted by Joel Raupe at 7:15 PM