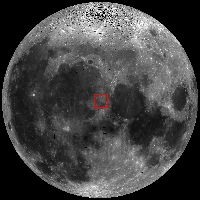 Jeffrey Plescia
LROC News System
The origin of many features within the mare remain ambiguous.

Since the mare are generally older than 3 billion years, small features are worn down and rounded from meteorite bombardment.

Thus their true mode of origin is not easy to discern. To the south are the mare units of Palus Putredinis, and to the north is the ejecta from the crater Autolycus.

The fact that the crater is centered on the summit, the symmetry of the topography and the presence of a crater on the east side that appears to have dark ejecta suggest the feature might be a volcanic cone. The hill stands about 250 m above the surrounding plains and has a slope of about 8°. The slope is steeper than expected for a low basaltic shield, more consistent with a cinder cone.

The grouping of hills seen in the WAC mosaic was originally mapped as Fra Mauro Formation (basin ejecta) and crater rim material by Hackmann (1966). Looking around the area south of Autolycus, there are several hills that have craters near their summit or are symmetric in shape, both attributes that might suggest a volcanic origin. Elsewhere on the Moon, there are fields of volcanic vents that look similar to these. This may be a volcanic complex that has not yet been recognized.

Map the entire NAC mosaic at full resolution HERE.
Try and decide for yourself: basin ejecta or volcanic?