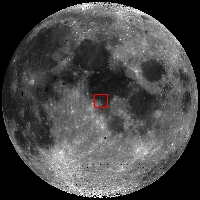 
In the absence of an absolute age date, lunar scientists have to rely on the geomorphology of a crater to determine how old it is relative to other craters. The sharpness of the deposits in today's Featured Image is a good indicator that Moltke is young, probably Copernican in age. Large cracks in the impact melt formed as the melt cooled and contracted towards the center of the crater. The uneven terrain within the melt is probably composed of smaller ejecta blocks that have been mixed in with the impact melt. These features have not been covered by regolith or debris flows from the crater wall that naturally accumulate over time, indicating that Moltke is probably young. Do these observations agree with a larger contextual view?


These observations do agree with the larger contextual view! A bright halo of ejecta surrounds Moltke, superposing older and darker mare material. The "freshness" of the impact melt and crater wall, the brightness of the ejecta blanket all argue that Moltke must be a relatively young Copernican aged crater.


Explore more of the Moltke melt sheet in the full NAC frame!


The dry debris flows in the context of the western side of Moltke crater were also imaged from LRO during the brief and extraordinary low-periapsis maneuvers, on August 15, 2011, from only 24.96 kilometers altitude; with resolution of 40 centimeters. Those unique unprocessed frames are M168048451L and M168048451R.