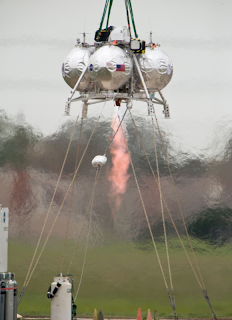 Project Morpheus used to be called Project M, and it was an ambitious plan to send a Robonaut to the moon in under 1,000 days by embracing efficiency and cooperation while avoiding bureaucracy as much as possible. We've been huge, huge fans of the project ever since its manager, Matt Ondler, defended the idea to a seemingly uninterested NASA in an impassioned blog post that ended with "we will continue to push back the darkness until they chain the doors and take away our hacksaws."

We were completely sold, of course.

That was back in July of 2010, and since then Robonaut has ended up on the International Space Station, and Project M has (for better or worse) morphed into Project Morpheus, a vehicle designed to transport a robot (or anything else) to the lunar surface. Just two days ago, Morpheus underwent a test firing of its brand new engine.