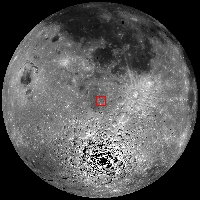 
The lonely journey of this large boulder is apparent from its track in a sloping regolith surface. A casual glance might suggest that it happened last week, or even that its rolling might resume at any moment. However, closer inspection will detect a few craters that clearly superpose and therefore post-date the track, showing that this 9-meter diameter boulder stopped rolling some time ago. Impacts are used in this way to provide a relative sense for the timing of events on planetary surfaces across the solar system. The procedure assumes a steady flux of impacting bodies in each size range, with smaller impacts being much more frequent than large impacts.

Though long ago to humans, however, this boulder's journey was made in geologically recent times. Studies suggest that regolith development from micrometeorite impacts will erase tracks like these over time intervals of tens of millions of years. If rate estimates are accurate, this boulder track might not be older than 50-100 million years. Eventually its track will be erased completely. What might have caused the rock to roll so recently? Perhaps this boulder was sent on its way by ground-shaking caused by the violence of a nearby impact. Perhaps a direct hit by a small meteoroid did the job.


The WAC-derived GLD100 Digital Elevation Model (DEM) of the area, shown in the inset below, offers a sense for topographic relief unavailable in the WAC mosaic alone. We can see that the location of today's Featured Image is in a zone of relatively gradual slope, just beyond the steeper slopes of the Schiller central peak complex. Thus, it is unlikely that our boulder will continue rolling anytime soon. It's arrived in an area with too gentle a slope. 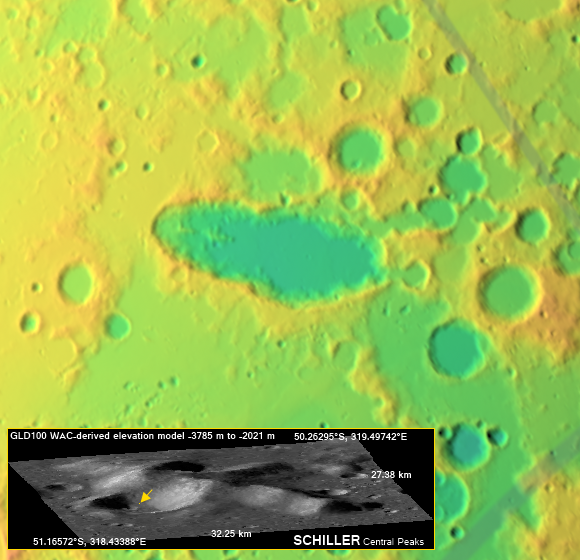 Look for other boulder tracks in the full NAC image.

Additional examples of boulder behavior can be seen in A Gathering in Lacus Mortis, Sampling Schrödinger, and Frozen in Time.
Posted by Joel Raupe at 10:46 PM