Howard Fink takes a closer look at Hermite A 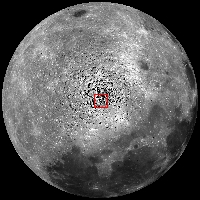 A lingering concern from those early, heady days of the Vision for Space Exploration, the initiative that set in motion the five spacecraft now orbiting the Moon, has been how to take full advantage of the unprecedented amount of data the precursor robotic spacecraft would return to Earth. This was true especially of LRO, a mission that broke the record for the sheer volume of information returned from deep space (from all previous missions combined). One answer emerging has proven to be crowd-sourcing.

The regular release of data in three month intervals has inspired many not professionally attached to the mission to assemble new global maps and montages. Even so, if the science still being pulled from the data record returned by the relatively modest Lunar Pioneer mission is used as a guide it's likely new discoveries about the Moon will still be being announced a least a decade after the LRO mission comes to an inevitable end.

One of those assembling lunar terrain models from LRO data is Howard Fink of New York University, in his case the LRO laser altimetry collected by the LOLA instrument - the most comprehensive of its kind.

Fink has just released a new and better model of Hermite A, a 22 kilometer-wide highland crater with an interior in permanent shadow not far from the Moon's north pole. That model can be viewed in detail at his Wordpress AstroPhoto blog, HERE.

In addition, "in tribute to all those who don't still have to look up how to spell its name," Fink released in February a remarkable look at Rozhdestvenskiy, HERE, in the context of the whole lunar pole region. Both can readily be compared with the data gleaned from the LROC Wide Angle Camera (WAC) derived elevation model, visible using the tools accompanying the LROC QuickMap, HERE.