LROC Kagami-mochi on the Moon! 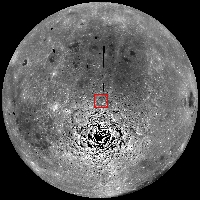 
Today's Featured Image highlights a circular mound with about 1.1 km in diameter, located on the floor of Antoniadi crater. Central portion, about 650 m across, consists of steeper hemispherical dome, and shallower outer skirt. This unusual feature looks like a flattened kagami-mochi (A Japanese new year decoration composed of two flat circled rice cakes, the smaller placed atop the larger). How did this  mound form?

Antoniadi crater is about 143 km in diameter, and is located in the south portion of South Pole-Aitken basin. The central circular portion of the crater floor, about 55 km across, is relatively flat and smooth, formed as a very fluid mare basalt flooded the floor and then hardened. The mound in today's Featured Image is found on this flat surface. Perhaps the mound started out as a small pyroclastic cone, and was covered by late stage lavas? How did the skirt form? There are still many mysteries on the Moon. As LRO collects more measurements the seemingly odd features, like this kagami-mochi mound, will become more familiar.


Many similar shaped mounds are found on Antoniadi's smooth and flat floor, but are relatively rare on other mare surfaces. Why only in this particular crater? The reason might be due to the relatively young age, this mare basalt is younger than 2.6 billion years. Over time such small features will erode into the background due to the relentless effects of micro-meteorite impacts which work to equalize topographic features.

Find other kagami-mochi shaped mounds in the full NAC frame yourself!

Spot it here (twice) in this 360 degree flyover, too (using an LROC overlay).

Spot it here (twice) in this 360 degree flyover, too (using an LROC overlay). Apologies for posting again as I forgot to include the link: YouTube Vid - http://www.youtube.com/watch?v=wnAh8RHL12k&feature=relmfu