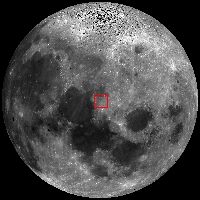 
What causes such an astonishing range in textures and tones as we find in this image? Here we see a jumbled mixture of light and dark, blocky boulders (many the size of small buildings), finer deposits between and around the boulders, and dark (low albedo), flat zones that are almost completely free of boulders. A landscape formed in an instant - ground zero for one of the most violent processes found in planetary studies.

The tremendous energy released when an asteroid or comet slams into the Moon results in compression, shattering, accelerating, melting, and even vaporizing of target and impactor. Why so much energy? Hypervelocity is the answer - the bolide (comet or asteroid) is typically traveling greater than 15 km/second; scientists estimate the energy of impact in terms of megatons equivalent of TNT because the interaction is truly explosive. Hyperveolcity is different from a low-velocity impact, which might displace some rock and make a thud, but will not produce an explosion and larger crater. Hypervelocity craters are many 10s of times the diameter of the bolide that creates them.

Following an impact, some material falls back into the cavity, either as mass wasting off the crater walls or as direct in-fall from the ejecta plume. Depending on the velocity of the impactor, the impact angle, the size of the impactor, and gravity, the amount of material that is ejected or stays within the crater varies widely. Impact melt, which tends to be a darker deposit than many types of bedrock because of its glass content, will flow and pool in low-lying areas and also coat some of the boulders in encounters on its way. This accounts for the range in reflectivity and the smooth, flat areas on the crater floor in this Featured Image. This crater also has a high-reflectance ejecta blanket that can be seen in the regional WAC mosaic, provided below. Exploration of craters like this provide subsurface samples to future explorers, which in turn provide insights into the local three dimensional geology and the impact process that formed the crater.

Examine the full NAC image for additional occurrences of impact melt and other features. More examples of small, young craters can be found in Featured Image postings Brayley G, Recent Impact in Oceanus Procellarum, and Farside Impact!
Posted by Joel Raupe at 5:20 AM