LROC: Rim on a rim (Hermann B) 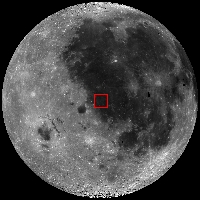 
Crater rims are a boundary between the inside and outside of a crater. Thus the rim is also where the slope changes from steeply down into a crater to the shallow sloping exterior.

This change in slope results in a ridge along which dry debris flows often form and carve backwards into the rim. This fresh crater is almost on top of the rim of Hermann B, so what does the whole crater look like?


Amazingly, the small perched crater is not a simple bowl shape! Instead of having a discrete rim that rings the entire crater, the crater rim exists only along the upslope portion of Hermann B's crater wall. The other half of the crater rim is a mess! Boulders cover the center of the crater, and streamers were ejected downslope. The blocks hint that the bolide might not have been traveling very fast, and maybe it was a block of ejecta from another crater. Because the bolide that created the fresh crater may have been traveling relatively slowly when it impacted into Hermann B's sloped crater wall, the crater did not form a uniform shape!