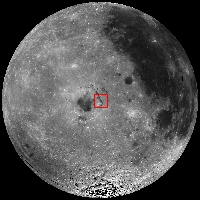 
Although volcanism on the Moon was a prevalent process, as evidenced by the voluminous maria, volcanic constructs such as domes and cones are not particularly common. However, several regions including the Marius Hills, the Gruithuisen Domes, and the Compton-Belkovich region exhibit landforms interpreted to be volcanic constructs. Searching for similar morphologic features in LROC NAC and WAC images will help identify other volcanoes.

On first glance, today's Featured Image may resemble another smooth region of mare with prominent tectonic features. The LROC NAC images are wonderful for studying the morphologic detail of the Moon's surface, but sometimes multiple NACs or LROC WACs are needed to grasp the "big picture" of the geology glimpsed in detail in a single NAC. In this case, we cannot rely solely on the high-resolution NAC image for interpretation of this landform, and must pair our NAC observations with a WAC context image to expand our view. Of course, imaging the whole Moon at NAC resolution would really help, too.


By using knowledge of where on the Moon the Featured Image is and then exploring the LROC WAC context image above, the landforms may be observed more completely. In the WAC mosaic, the step-like features are part of an oblong, irregular bulge near the boundary of the Lacus Veris mare material and the highland material in which Orientale basin formed. The feature is approximately 5 - 6 km wide and the illumination shows that it is topographically higher than the surrounding surface (but the WAC DTM or a NAC DTM could be used to determine how much higher the feature is from its surroundings). There is an ~250 - 400 m wide rift-like fracture or fissure down the middle of the bulge.


These morphological characteristics are very similar to low shield volcanoes, which are formed by the same means as the Hawaiian shield volcanoes but have a much lower height-to-diameter ratio1. So, contrary to many places on the Moon, the Lacus Veris region evidently has notable volcanic constructs! The opening image is located on the distal northeast flank of the shield volcano, and probably represents multiple eruption events since successive eruptions are responsible for building the gently-sloping shields in terrestrial shield volcano eruptions.

Take a look at the full LROC NAC image; can you make observations that would help support or refute the low shield volcano interpretation?