Answering the riddle of Giordano Bruno 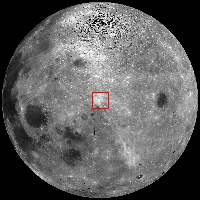 
The Moon is covered with craters of various shapes and sizes, and in various states of preservation. Scientists have studied these spectacular features for over five decades, yet there are still many things about craters that we just don’t understand. The study of craters is important because we use them to determine the ages of planetary surfaces. Now, very high resolution imagery from the Lunar Reconnaissance Orbiter Camera (LROC) is allowing us to see lunar craters as never before. Under such scrutiny, one very fresh crater is revealing a host of secrets about the crater-forming process and revealing that it’s not as young as some people may have originally thought.


The crater in question is Giordano Bruno, a 22 km diameter crater located on the far side of the Moon, just beyond the eastern limb. Like all craters on the Moon, this one was named after a famous scientist, in this case, a sixteenth century Italian philosopher who was burned at the stake in 1600 for proposing the existence of “countless Earths.” Because of its position on the far side, Giordano Bruno crater was not seen by humans until it was photographed by the Soviet Luna-3 mission in 1959. But then, this crater was immediately recognized as one of significance, because of its very bright and extensive ray system.