Natural Bridge on the Moon 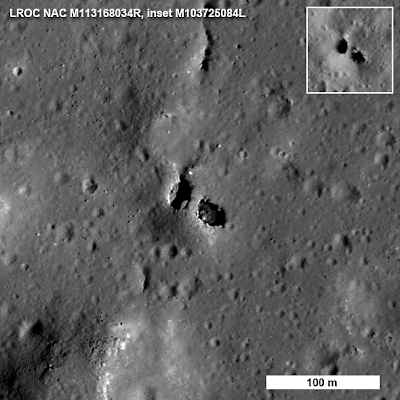 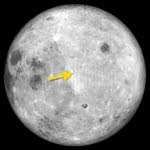 Just when you think you have seen everything, LROC reveals a natural bridge on the Moon!
Who would have thought? Natural bridges on Earth are typically the result of wind and water erosion - not a likely scenario on the Moon. So how did this natural bridge form? The most likely answer is a dual collapse into a lava tube. From the Apollo era, SELENE, and LROC images, we know that lava tubes did form in the Moon's ancient past. SELENE and LROC images have raised the tantalizing prospects that lava tubes remain intact to this day. However this bridge did not form in mare (basalt), but rather in (a splash of) impact melt from King crater! More astonishingly, the same NAC image revealed two natural bridges - not just one! 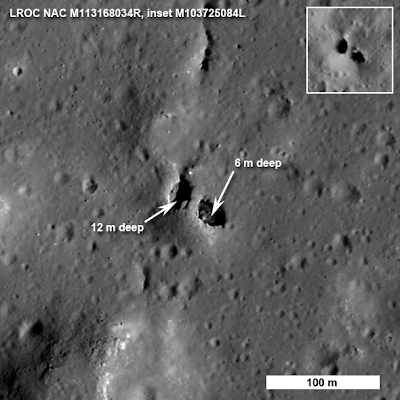 The bridge is approximately 7 meters wide on top and perhaps 9 meters on the bottom side, a 20 meter walk to cross from one side to the other (see full-size view of above, HERE [NASA/GSFC/Arizona State University].
How do we know for sure that this feature is truly a bridge? Look closely at the west pit (left side) and you can see a little crescent of light on its floor. That patch of light came from the east, under the bridge. In another lower resolution image (see inset), you can see light passed under the bridge from the west. So there must be a passage. How did this oddity form? The impact melt deposit on the north rim of King crater is over 15 km across and was emplaced in a matter of minutes as the crater grew to its final configuration. 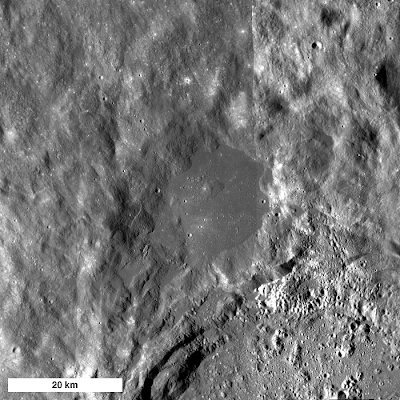 King Y: A large (17 km east to west), smooth impact melt "pond" on the northwest rim of King crater (5°N, 120.5°E - 72 kilometers in diameter). LROC WAC mosaic [NASA/GSFC/Arizona State University].
The impact melt that was thrown out of the crater pooled on the newly deposited ejecta and must be many tens of meters thick, allowing its interior to stay molten for a long time. As the local terrain readjusted after the shock of the impact, the substrate of this massive pool of melt was jostled to some degree. Local pressures built up and the melt moved around under a deforming crust. You can see that the south end of the bridge extends from a small local rise, shaped something like a blister. Perhaps some melt was locally pushed up forming the rise, then the magma found a path to flow away, leaving a void which the crusted roof partially collapsed? Right now we do not know for certain the details of how the bridge formed, however, the LROC team is processing stereo images into topographic maps to aid scientists in determining exactly what took place on this fascinating melt sheet. There are actually six NAC images in which you can find the bridge under varying lighting (M103725084L, M103732241L, M106088433L, M113168034R, M123785162L,* M123791947L*). Why so many images?

The melt sheet north of King crater is one of fifty Constellation Regions of Interest - high priority for LROC coverage. As the pair of images below vividly illustrate, having a set of images of the same area under varying lighting allows scientists to more confidently interpret the local geology and thus better prepare for future exploration.

Left shows the bridge when the Sun is 42° above the horizon and the right is the same area when the Sun is 80° above the horizon (near noon). M113168034R on the left, M123791947L* on the right, both are 128 meters across, north is up - full-sized inset, HERE [NASA/GSFC/Arizona State University].
Explore the entire LROC NAC image and investigate the variety of geologic features in the King crater melt sheet. Can you find the second natural bridge in the full NAC frame (hint - it's fairly close to the one shown above and about half its size)? 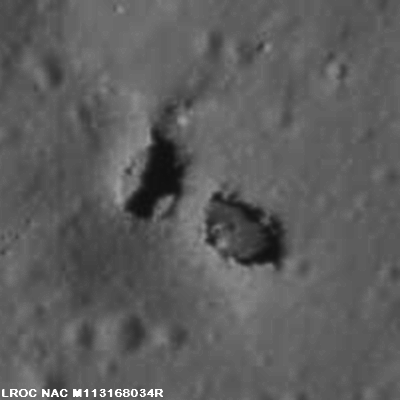 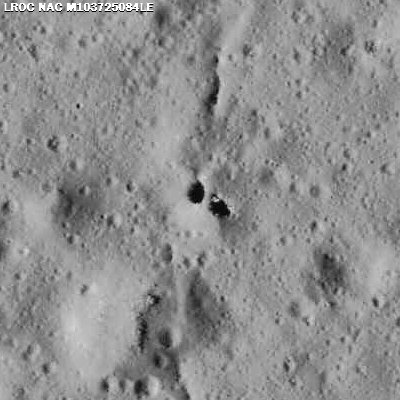 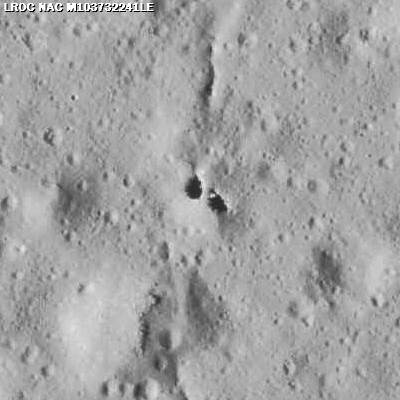 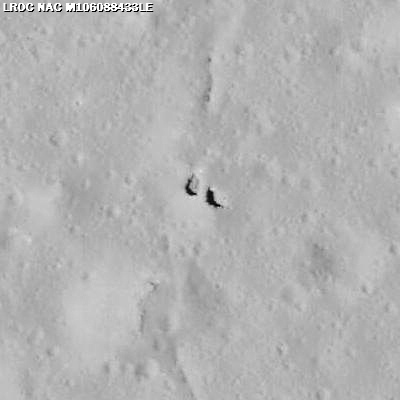 The next opportunity to image the King ROI took place a lunar month later, August 28, 2009, still in the LRO Commissioning phase of its mission. The Natural Bridge was imaged in afternoon sunshine from 127.88 kilometers, and the 400 pixel field of view was approximately 517 meters. LROC NAC observation M106088433LE, LRO orbit 781, res. 1.29 m, phase angle 36.92° [NASA/GSFC/Arizona State University]. 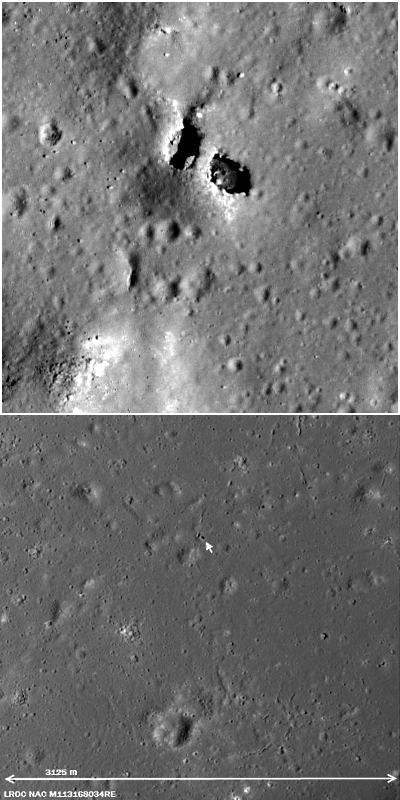 By November 18, 2009, LRO was several weeks into the year-long Nominal mission, circling the Moon at an average altitude of 54 kilometers. This "Shadow under a Walking Bridge" and Featured Image (Inset) view was released with its announced discovery, September 7, 2010. Below that is shown a greatly reduced "full-width" of the Right Frame image from the LROC NAC observation, to allow for context. LROC NAC M113168034R, from 60.49 km, LRO orbit 1811 (Res. 0.625 m, phase angle = 46.36°) [NASA/GSFC/Arizona State University].
Posted by Joel Raupe at 7:12 PM

Eye candy for the lunatic in all of us. Awesome formation, the pictures are amazing... what a find! Thanks for the links...