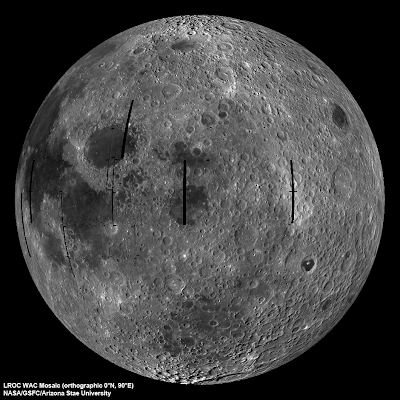 The LROC WAC is a real workhouse and gets little attention, at least so far. Since the WAC is a wide angle camera, it maps nearly the whole Moon over a course of about 4 weeks and the lighting and viewing geometries are complicated. In the first case, the Sun angle at the equator changes about 28°. This change in lighting over a mosaic cycle results in a very different surface brightness where the end of the mosaic meets the beginning. The viewing angle of the WAC changes from straight down at the center to 45° at the edge since the camera's field-of-view is 90°. The extreme angle at the edges results in geometric distortion and an apparent change in brightness of the surface. Both effects need to be removed to make mosaics and the LROC team has been working on corrections since this Spring. The global mosaic from which this view was produced contains over 3700 WAC images, which translates into a lot of processing! Note that the black "holes" (gores) are the result of LRO slewing off nadir to acquire NAC stereo images. Over the course of the mission these gores will be imaged and the mosaic completed. 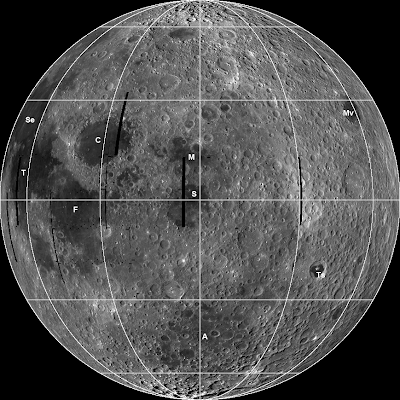 Explore the 400 m/pixel WAC view of the eastern hemisphere of the Moon!

Visit the LROC Wide Angle Camera mosaic of South Pole Aitken basin and another of the Orientale basin.
Posted by Joel Raupe at 8:39 PM