Copernicus and the lunar timescale 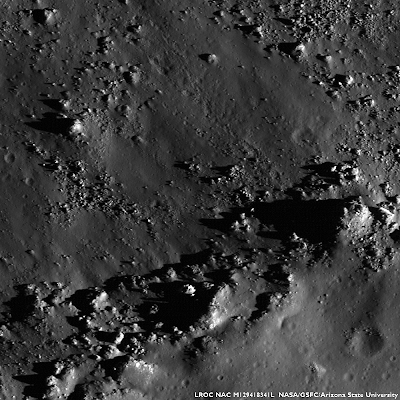 Copernicus crater played a key role as pioneering lunar geologists Gene Shoemaker and Robert Hackman unraveled the basic stratigraphy of the Moon fifty years ago. Stratigraphy is the science of determining relative ages of geologic materials by observing overlapping relationships between different geologic units. What is a unit? In the case of the Moon, the most basic geologic units include crater ejecta, mare basalt, volcanic ash, and the ancient highlands crust. Dr. Shoemaker and his colleagues noted that rays from different craters exhibited a range of albedos, from the very bright (Aristarchus crater) to the barely visible (Copernicus crater). 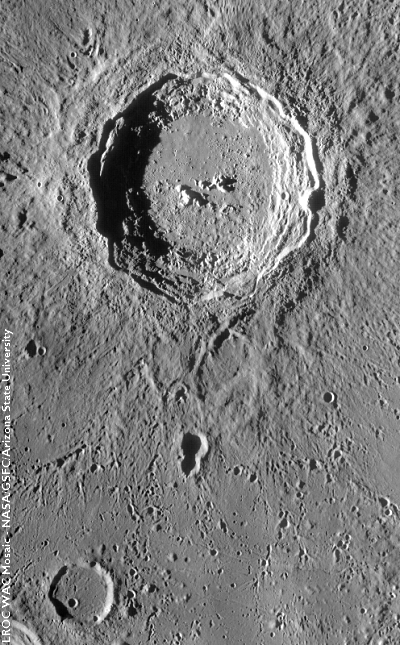 They correctly inferred rays fade with time, as they are sand blasted by micrometeorite impacts and exposed to the relentless effects of solar wind, cosmic rays: processes often referred to as “space weathering.” By tracing the path of rays, relative ages of many units can be easily determined. 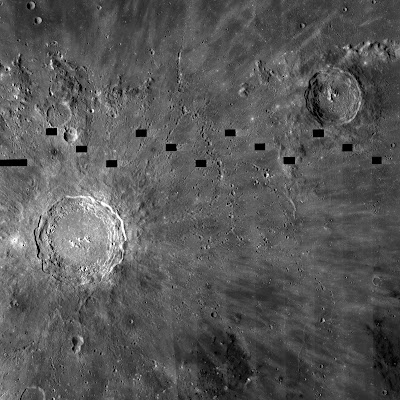 LROC Wide Angle Camera mosaic showing Copernicus crater (L), Eratosthenes (R) along the southern rim of the vast Mare Imbrium impact basin. Ejecta of Copernicus cross over Eratosthenes, showing Copernicus is younger. Image field of view is ~400 km, north is up [NASA/GSFC/Arizona State University].
Just to the east of Copernicus crater is another key crater that in the lunar stratigraphic story revealed by Shoemaker and colleagues, Eratosthenes (58 km diameter). The two neighboring craters look very similar in terms of the freshness of morphological features (rim, walls, central peak), however Eratosthenes has no rays – they have completely faded into the background. The fact that Eratosthenes has no rays shows it is older than Copernicus, but the fact that its form is still sharp indicates that it is not so old that smaller impacts have worn it down. So Eratosthenes is "middle aged" in the lunar timescale. When the lunar timescale was unraveled, scientists had no samples from the Moon so they could not accurately determine the absolute ages of the geologic units they identified. 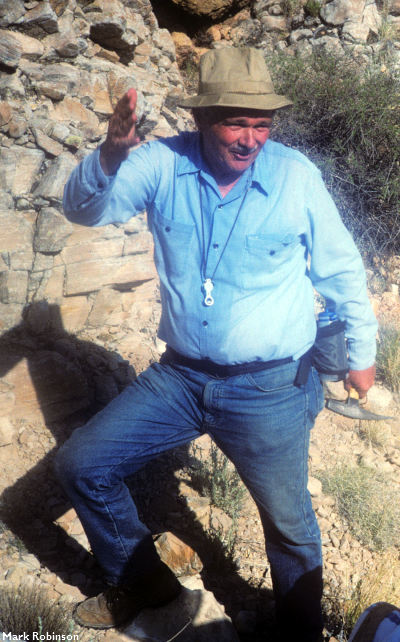 Gene Shoemaker (1928-1997) made many major contributions to planetary science. One of his most significant was deducing and proving that Meteor Crater in Arizona was formed as the result of an asteroid slamming into the Earth. Here he is seen enthusiastically telling the story of Meteor Crater to a new generation of planetary scientists while perched on the steep interior walls of the crater [Photo by Mark Robinson].
Later, material believed to be Copernicus ejecta was sampled by Apollo 12 astronauts, and these samples were radiometrically dated to be close to 800 million years old. 800 million years old is certainly an ancient age by terrestrial standards but is a relatively young age for the Moon. We have no samples from Eratosthenes and thus its absolute age is inferred from counts of smaller craters that have formed on its ejecta and interior. To this day, our knowledge of the ages of the Copernican and Eratosthenian units are poorly constrained. Obtaining samples of key areas within these two periods is a high priority amongst lunar scientists. 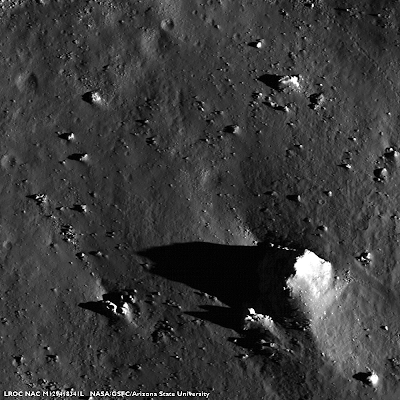 Farther down the terraced walls toward the crater floor, boulders of variable sizes are eroding out of the steep slopes. Many boulders are precipitously sticking out of the crater walls, such as the ~50 m boulder in the lower right. Erosion has completely freed some boulders, as evidenced by the boulder trail in the upper right. Downslope direction is toward the upper left, image field is 470 m [NASA/GSFC/Arizona State University].
As scientists learned more about the Moon from Lunar Orbiter and Apollo missions, the lunar timescale was refined. However, the Shoemaker and Hackman work still stands as our basic understanding of lunar stratigraphy. To learn more on lunar stratigraphy and other aspects of lunar geology, you can consult Don Wilhelm’s tome “The Geologic History of the Moon”. It is a serious read, but summarizes much of what we know about the Moon from a historical geology point of view. Certainly, the exciting results from LRO and three recent international missions (SELENE/Kaguya, Chang’E-1, and Chandrayaan-1) will provide many opportunities to revise past ideas! Perhaps Dr. Wilhelms will revise his masterpiece in the near future?

Explore the well-preserved impact landforms of Copernicus crater in the full NAC image and the WAC mosaic. 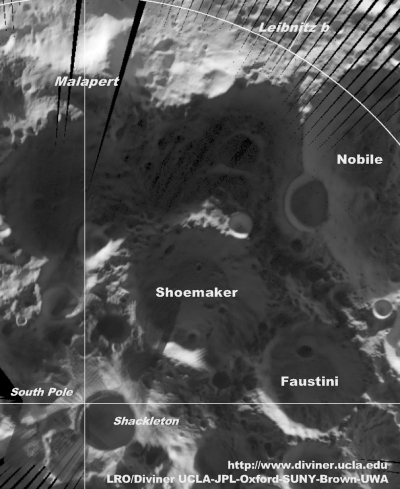 As an appropriate segue, a look at Shoemaker crater, once part of the stubbornly elusive, nearly completely shadowed terra incognitia near the Moon's South Pole. The South Pole LROC WAC mosaic below shows Shoemaker in visible light, while this 2009 image show the area, really for the first time, in star light, data collected by the Diviner instrument, also on-board LRO. Shoemaker became an even more fitting tribute to Dr. Shoemaker as final resting place for at least a portion of his remains which were deorbited here with Lunar Prospector, July 31, 1999. [NASA/GSFC/UCLA].
Posted by Joel Raupe at 3:55 AM