LROC: Scar in the Farside Highlands 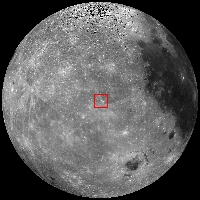 
With such an abrupt beginning and end, and no obvious connection to typical geologic flow, fault or scour processes, what could have caused this curious arcuate, negative-relief landform in the lunar highland regolith (24.3°N, 245.0°E)?

Sometimes it helps to step back for a wider look.


Compare the NAC frame above with the segment taken from a LROC Wide Angle Camera (WAC) mosaic below.

In our slow zoom out, we see that several similar features, appearing as blind valleys with abrupt endings, are aligned in a north-northwest to south-southeast direction, but are still somewhat isolated from anything that might have caused them in the nearby vicinity.

Sometimes, however ... it helps to step WAY back!


Notice the arrow in the northwest corner of this WAC mosaic, which overlays and parallels the linear trend of the featured scar. It points toward the center of Mare Orientale, a 900 km-diameter impact feature. Several crater chains are visible to the southwest of the arrow at this scale that similarly radiate from the Orientale basin. The violence of the basin-forming event was so great that it hurled prodigious volumes of target rock hundreds of kilometers across the lunar surface. The orientation and location of the featured scar pattern makes the Orientale impact a plausible cause for what we see there. In addition to rocky projectiles, ground-hugging and/or ballistically emplaced ejecta deposits are a common accompaniment to large impact features on the Moon. From their morphology and occurrence, they seem to have behaved in a very fluid-like way, and can morph and merge as they flow across the surface until losing energy and coming to rest as dunes or lobes. Today's Featured Image appears to be a place where advancing dunes merged and "healed over."

In addition to the orientation of this linear form, what other clues would help determine if this feature is indeed associated with the Orientale impact, or part of some other debris source? What other clues are visible in the full NAC frame?

Additional examples of fluidized ejecta can be found in the Lavish Lobes of Necho R, and in King Crater Ejecta Deposits. The Orientale Basin is featured in the LROC PDS Release 5 post, and the Farside! and All the Way Around post.