LROC: Tectonics at the edge of Procellarum 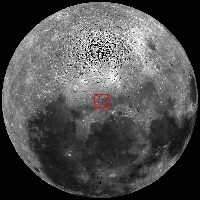 
A mare wrinkle ridge transitions to a highland lobate scarp at the edge of Oceanus Procellarum. Illumination is from the lower-left in this 2.9 km wide mosaic of LROC NAC images M107069913LE and M107069913RE [NASA/GSFC/Arizona State University].


Two types of compressional tectonic landforms are commonly observed on the Moon: wrinkle ridges and lobate scarps. Wrinkle ridges are long, often sinuous hills in mare basalts and are thought to be folded rock layers overlying deeper faults. Lobate scarps usually occur in the highlands and are interpreted as rocks lifted up by faults very near to or even breaking the surface. There are a few locations where a wrinkle ridge transitions into a lobate scarp or vice-versa, such as here at the northern edge of Oceanus Procellarum (60.5°N, 331.4°E). In this LROC NAC mosaic, the lobate scarp in the highlands massif to the northeast meets a wrinkle ridge to the southwest when it reaches the otherwise flat-lying Procellarum basalts. You can also see lots of boulders eroding out of the wrinkle ridge.


Wrinkle ridges are thought to have formed after the basaltic lavas erupted, filling in the basins on the nearside, and weighing down the crust. All that extra weight probably made the ground sag and bend, causing the basalt to buckle and fold in some areas. On the other hand, lobate scarps are thought to form from radial contraction or shrinking of the entire Moon. The global radial contraction built up compressional stresses in the crust until the stress was great enough to fracture all the way to the surface. The transition from wrinkle ridge to lobate scarp may be due to the contrast in materials, especially if the basaltic lavas are layered and the highland massif lacks layering. However, the relationships between wrinkle ridges and lobate scarps at transitions like this are still being studied.

Take a look at the full NAC mosaic - can you find any other scarps or ridges?