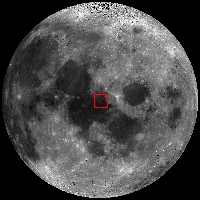 
Lucian crater, located in Mare Tranquillitatis at 14.3°N, 36.7° E, is a small (~7 km in diameter), relatively fresh crater. Because Lucian is still young, rock is freshly exposed in its wall, and the rocks are layered! But how do these layers relate to Mare Tranquillitatis? Scientists think that the maria were formed as the product of large scale flood volcanism.


Billions of years ago large volumes of lava were erupted from fissures in the lunar crust to cover 17% of the Moon's surface. But this process occurred over a period of time with a very low viscosity lava. This model of mare formation predicts that the mare are made up of many distinct layers. Prior to LROC some scientists argued that the layers were thin, and some scientists argued that the layers were thick. LROC data shows Lucian and other craters have thin layers that are a few meters thick. LROC has again helped scientists understand more about the nature of the Moon!

How many layers can you count in the full NAC frame?