An ill-defined portion of an otherwise circular rim 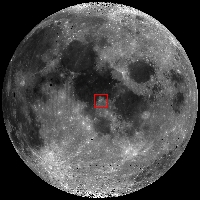 
Censorinus is a fresh impact crater along the southeastern shore of Mare Tranquillitatis (0.47°S, 32.73°E). The amount of detail in the NAC frame is staggering, and worthy of a baker's dozen Featured Images. Noteworthy, however, is how well-formed and highly circular the rim is with the exception of this small portion along the southeast perimeter. Are there good geologic reasons for something like this, or is it simply the luck of the draw which portion of a crater rim will get a little sloppy? Such things are not much more than curiosities, but they are great for initiating geologic discussion!

A neat, circular crater is usually a sign of sufficiently high energy from a hypervelocity projectile to create an explosive outcome. Censorinus is clearly the result of just such a high-energy, explosive event. In the case of the featured area of the rim, however, we see that energies were not high enough to excavate the target material radially all the way to meet the rest of the rim, but stopped short, as though making a smaller-diameter feature. This action resulted in littering the surface adjacent outside the wall with loose ejecta blocks, giving the impression that the rim stops suddenly in the Featured Image.


Why was material in this portion not accelerated to create a neat rim? Since the 'ground zero' target rock was destroyed in the impact, it is difficult to tell what kind of influence the local geology may have had on the energy distribution. The final answer therefore remains a bit of a mystery, but it is probably safe to speculate that target lithologies played a role here. The terrain along this portion of Mare Tranquillitatis shoreline is fairly rugged, and may contain a variety of rock types, some of which may be more resistant to excavation than others, thus creating a heterogeneous target for an incoming bolide!. A partially buried block of hard rock or even greater-than-average compaction in the regolith might be all that is needed to explain today's Featured Image.


The high-reflectance spot that marks the location of the Censorinus - Censorinus A crater pair may just be visible through a small telescope at the southwest edge of Mare Tranquillitatis beginning about the First Quarter phase of the lunar cycle, but albedo differences will become more accentuated as the Moon waxes to full and the shadows shorten.

What additional clues can you find in the full NAC frame?