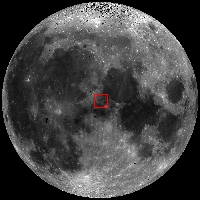 
There are times when seemingly unrelated discoveries about other planets come forward to enlighten us about the history and processes of the Moon. A recent paper, using data from the orbiting MESSENGER mission mapping Mercury, describes a number of newly discovered rimless pits and depressions.  These pits (called hollows by the mission team) are difficult to explain by impact processes and are hypothesized to be the products of outgassing from the planet’s interior.  They are often associated with color anomalies (which implies compositional differences from the surrounding terrain) and frequently found on the floors of impact craters and basins.


Impact craters come in a wide variety of sizes, but within selected size ranges, they all appear more or less similar.  Small craters are nearly perfectly round and bowl-shaped with smooth rims that are raised above the surrounding terrain.  Craters with irregular shapes and no raised rims suggest that processes other than impact might be at work.  It has been suggested that on Mercury, these “hollows” were created by the violent release of volatile substances.  Such a release of gas under pressure accompanies volcanic eruptions called pyroclastic, meaning “fire-broken” (fine liquid rock (magma) fragments spewed into space and cooled during flight).


We’ve known about pyroclastic eruptions on the Moon for many years, evidenced by the green glass of the Apollo 15 site and the orange-black glass from Apollo 17.  Careful search of the images taken from lunar orbit reveal the rimless pits that served as vents for the pyroclastic eruptions that produced these Apollo glasses.  They are distinct from impact craters and often are found on the floors of craters and basins along fractures, the conduit by which volcanic magma travels to the lunar surface.


Sometimes pit craters or “hollows,” found across the surface of the Moon, take unusual form.  The kidney-shaped feature shown above is named Ina; after its discovery in one of the Apollo orbital images, it was informally named the “D-caldera” after its shape and the interpretation that it represented a volcanic collapse feature.  Ina is about 3 km across and consists of a series of small platforms, mounds and holes within a larger irregular depression.  Other similar pits and hollows occur elsewhere on the Moon (e.g., on the floor of Rima Hyginis).  And while not major features, they have been found often enough to bother many lunar scientists, who had no good explanation for their origin.


About five years ago, we got a clue as to the possible origins of these features.  Pete Schultz and associates from Brown University published a paper showing Ina displayed unusual spectral reflectance characteristics.  The slow micrometeorite bombardment of the Moon adds craters to the surface and also makes small iron-rich glass particles that darken and redden the surface.  As these glass particles build up in the soil, a soil is said to “mature.”  Fresh surfaces are more “blue” in color (actually, less red) and become redder with time as the soil matures.  Most lunar features show age or “become mature” on timescales of millions of years.  Ina shows very few impact craters on top of it, meaning that geologically, it is very young.  Moreover, the soils associated with Ina are much bluer than surrounding areas.  Both of these observations suggest that Ina is young with immature surfaces.


How are these features created?  Significant volcanism on the Moon largely stopped at least a couple of billion years ago.  The Brown team thought that the combination of young age, low maturity and unusual morphology suggested a relatively uncommon pit-forming process.  They proposed that the explosive release of volatile substances from the lunar interior would have disrupted the surface, created a chaotic mixture of rock and soil, exposed fresh surfaces (creating the immature spectral signature), and formed a collapse depression caused by the instantaneous removal of mass from below.


Now we can see that the new Mercurian hollows have morphologies displaying spectral anomalies similar to the lunar collapse pits such as Ina.  The new data suggest that Mercury contains significant volatile substances.  These volatiles must be present at some depth, accumulated under high pressure until crustal failure ensues and a massive gas release results in an “eruption.”  This explosive event leaves behind a chaotic, disrupted surface (“immature,” with fresh bedrock and deep regolith “newly” exposed to space).


In the case of Ina on the Moon, its extreme youth is suggested both by the lack of overlying impact craters of almost any size, as well as the sharp preservation of topography in its cliff and pit interior morphology.  This extreme youth may be on the order of thousands to hundreds of thousands of years, not the millions and billions of years that typify most lunar landforms.  Such youth and the widespread distribution of Ina-like collapse pits across the lunar surface implies that outgassing events are occurring on the Moon now; it is highly unlikely that we were just lucky enough to find a singular or unique occurrence.


What might these volatile substances be?  Before the recent lunar missions flew, it was common to declare that water was not a possibility.  However, we recently discovered from study of the lunar samples that water was present in the deep interior of the Moon during the epoch of mare volcanism three billion years ago; water could still be present in the subsurface.  There are many other volatile substances that could be responsible as well, including carbon monoxide, hydrogen sulfide, gaseous sulfur, as well as other more exotic gases.  Because the compositions on Mercury are poorly known, the possibilities for exotic materials there are even more extensive.


The explosive release of gas from the deep interior (without the eruption of magma) appears to be an ongoing lunar process.  This gas release could provide at least a partial answer to two vexing lunar problems: the accumulation of volatiles at the poles of the Moon (discussed in my blogging many times, most recently HERE) and the infamous phenomena of Lunar Transient Phenomena (LTP), described as glowing reddish “clouds” hovering over the lunar surface that mysteriously appear and disappear.  Telescopic observers have reported seeing LTP for many years.


Unfortunately, we have not been able to verify and document these events, largely because they are transient.  Now we have direct morphological evidence for the venting of gas from both planets, making it possible that at least some LTP might be related to gas release from inside the Moon.  Stay tuned – the book of the Moon continues to be rewritten and expanded with new and interesting discoveries.


NOTE: The latest version of the paper Tony Lavoie and I wrote on using lunar resources to create a cislunar space faring system has been published in the Proceedings of the AIAA Space 2011 Conference.  A copy is available for download HERE.


Originally published October 8, 2011 at his Smithsonian Air & Space blog The Once and Future Moon, Dr. Spudis is a Senior Staff Scientist at the Lunar and Planetary Institute in Houston. The opinions expressed are those of the author and are better informed than average.
Posted by Joel Raupe at 10:16 PM