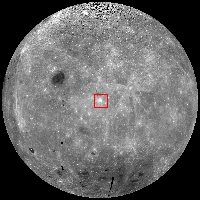 
Although LROC collects images of craters on the lunar surface at only one moment in time, impact craters are not as static and unchanging as these images may lead you to believe. The majority of material movement occurs during the impact event over a very short time, sometimes lasting only a few seconds, but post-impact modification plays a large role in crater erosion over time. In fact, post-impact modification begins immediately after the crater is formed! Wall slumping that forms terraces or debris piles on the crater floor and solidification of impact melt ponds and flows are just two examples of modifications that begin soon after a crater is formed. Over historical time (one year, ten years, 100 years) as well as geologic time (tens to hundreds of millions of years), crater modification proceeds to degrade the pristine crater into a shallower, less-distinct crater (you can see some of these types of craters in the WAC context image below).


Today's Featured Image highlights a granular debris flow that originated near the crater rim and flowed downhill from the northeastern wall of an unnamed crater within Virtanen crater (15.80°N, 177.39°E). Along the way, the dry particles were disturbed by boulders that deflected the material. In a previous post, a boulder acted as a dam to stop the debris from flowing and created a "flow shadow" where the low-reflectance material did not reach - similar to what is visible here. However, in some cases, there is space between the boulder and the location at which the debris forks for its detour. Why might this be? Here's a hint: take a look at these boulders - do any of them have boulder trails or do they look like they are eroding out of the crater wall itself? There are no visible boulder trails, and the boulders of variable sizes are not sitting on the crater wall surface. In fact, most of the boulders look partially buried. So, it is likely that the low-reflectance granular material deflected around these boulders because the boulders are eroding out of the wall material and represent a small topographical high compared to the smoother, unbouldered portion of the crater wall. What do you think?


Explore these debris flows from the comfort of your computer seat in the full LROC NAC image!