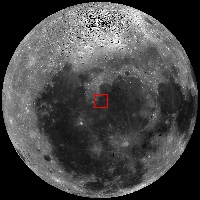 
Luna 17, carrying Lunokhod 1, landed on the flood basalt surface of Mare Imbrium on November 17, 1970, after entering orbit on November 15.

Today's Featured Image of Luna 17 and Lunokhod 1 was obtained during a low altitude (33 km) pass providing the highest resolution view yet of the landing site.

The same LROC Narrow Angle Camera frame captured both the lander and the Lunokhod 1 lunar rover, and nearly all the wheel tracks the rover left behind, just shy of 42 years afterward.

Once Luna 17 landed, ramps were deployed on two sides of the lander allowing for two possible directions for the rover to drive to the surface. In this case, the rover drove down the ramps on the east side of the lander. Rover tracks can be seen extending away from and around the rover. Also note the bright area around the Luna 17 lander; the surface was modified by the exhaust gases from the descent engines such that it appears brighter. This increased contract makes the rover tracks more obvious near the lander.

Lunokhod 1 traveled a total distance of 10.5 km. It was first commanded to drive south from the Luna 17 lander, making a loop across the mare surface, and then returning north to Luna 17. The rover was then directed to proceed farther north, making a small loop to the west, then returning to its track and continuing northward. The payload consisted of a suite of television cameras, a cone penetrometer to determine physical properties of the regolith, and an X-ray spectrometer to determine the chemistry of the regolith. An X-ray telescope and cosmic ray detector were also part of the payload.

Like Lunokhod 2, Lunokhod 1 carried a French-built laser retroreflector. The vehicle was tracked for a short period during the mission then lost. Once the vehicle was located using LRO/LROC images by the LROC team, it was targeted and recovered using the lunar lasers at the Apache Point Observatory. Because of its location away from the Apollo retroreflectors and Lunokhod 2, recovering Lunokhod 1 is important for lunar geophysical studies.

The rover’s journey across the surface formally ended on October 4, 1971, after 11 lunar day-night cycles (322 Earth-days). Attempts to contact the rover after the lunar night that began on September 14, 1971 were unsuccessful, apparently due to a failure of some component of the rover during the lunar night.


Explore the Lunokhod 1 site on your own HERE.

Revisit about the earlier LROC "rediscovery" of Lunokhod 1 HERE.
Posted by Joel Raupe at 2:46 AM