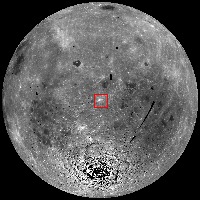 Ryder crater is rather oddly shaped; is it two craters or one?


It formed on a steep slope, which certainly contributes to the odd morphology, but it may have formed as the result of an oblique impact. But why does it resemble a snowman? Was it formed by the impact of a split asteroid? As with most complicated geologic problems, the real answer is likely some combination of hypotheses.

Ryder crater is named after Graham Ryder, a planetary geologist (petrologist) who made many important contributions to our understanding of the Moon. It is fitting to remember him this week as the annual Lunar and Planetary Science Conference unfolds. Many new results concerning the Moon, Mars, Mercury, and other bodies in the Solar System are being presented.

The WAC stereo dataset gives an awesome look at global topography. However, to really unravel the history of Ryder crater scientists need topographic maps with 10 meter contours, or better. As the LRO mission progresses Ryder crater will be imaged in stereo by the NAC, providing scientists with a higher resolution look, and thus the opportunity to model how this unique crater formed.

In the meantime, enjoy the view of Ryder crater, HERE.

Revisit some earlier LROC
Oblique views of the Moon: