LROC: Not your average scarp 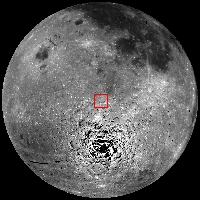 This lobate scarp wends through a region of mare basalts, but you will be surprised to know that the location of this image is on the lunar farside (59.921°S, 304.456°E), northwest of Zucchius crater. Even though the farside is not well known for vast deposits of mare like the nearside, there are regions of volcanically flooded terrain. Today's Featured Image highlights such an area, where contractional forces caused the mare materials to break along a fault and thrust upward, and the lobate scarp is the surface expression of slip on the fault. However, lobate scarps usually occur in the highlands and wrinkle ridges (another contractional tectonic landform) usually occur in mare regions. So why is a lobate scarp observed in this region of mare basalts?


Lobate scarps are thought to form from global contraction of the Moon, as its still hot interior cools. In contrast, wrinkle ridges - while contractional features - probably formed by a combination of faulting and folding of mare basalts, and so wrinkle ridges have a broad swell and a characteristic ridge (or wrinkle). However, just because lobate scarps and wrinkle ridges usually form in a specific terrain does not mean that they are prevented from forming elsewhere; both landforms represent characteristic surface expressions of tectonic compression.


Looking at the opening image, one can imagine that this area was squeezed together in the approximate east-west direction (right to left). When the rock could withstand no more contractional strain, it faulted and the eastern edge was pushed over the western edge, creating this broad scarp. But why not form a wrinkle ridge in this mare material? Perhaps the formation of the lobate scarp is telling us something about the mechanical properties of the mare in this location. The mare are a series of lava flows that form a layer-cake sequence. In between the layers may be soil interbeds that allow some layers to slip a little as the sequence of layers contracts. When layers can slip, a wrinkle ridge will likely form, and when layers can't slip, a lobate scarp might form. This hypothesis may be on the right track, because transitions from a wrinkle ridge to lobate scarp often occur at boundaries between mare and highlands, with the lobate scarp forming in highland material that has no discernable layering. Careful, though - when interpreting the origin of a tectonic feature, the entire region needs to be examined to answer questions such as what is the total population of contractional tectonic features, how are they oriented, and how do their sizes and shapes vary. Creating a comprehensive catalog of all tectonic features within an area allows scientists to estimate the contractional (and extensional) forces within the region. Only then can sense be made of why a single feature formed.

What do you think? Can you find any craters deformed by the lobate scarp in the full LROC NAC image, HERE? If you can, great! - you've found additional evidence for contraction of this surface!