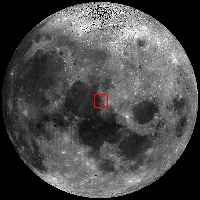 The Lunokhod 2 rover is still parked on the floor of the crater Le Monnier (25.830°N, 30.914°E). This NAC image was taken when the spacecraft was only 24 km above the surface, zipping along at about 1.6 km/sec (about 3600 mph). The spacecraft had to turn on its axis 27° to view the rover. The resolution is about two times higher than usual!

The Lunokhod 2 rover was carried to the surface on board the Luna 21 spacecraft. Lunokhod is the English translation of the Russian word “Луноход”, meaning Moon Walker. The ensemble was launched on 11 January 1973 and the landing occurred on 15 January in Le Monnier crater on the eastern margin of Mare Serenitatis. The coordinates of the landing site are 26.005°N, 30.406°E (on the basis of nine observations) at an elevation of -2769 m (1734630.9 m radius).

Lunokhod 2 is about 170 cm (5’ 7”) long x 160 cm (5’ 3”) wide x 135 cm (4’ 5”) tall, and it is almost circular when viewed from above. The vehicle had eight wheels and could travel at either 1 km/hr or 2 km/hr (0.6 and 1.2 mph). The lid on the top of the rover served to provide solar power and to keep the vehicle warm at night. When the lid was opened, the solar cells collected energy to operate the rover. At night, the lid was closed and a fluid heated by the decay of Polonium-210 kept the rover warm. The rover was controlled remotely by a team of Soviet controllers on Earth.

During its 37 km traverse, Lunokhod 2 headed south from the landing site and into the highlands from the southern rim of Le Monnier crater. Lunokhod 2 had difficulty on the slopes of the southern rim so it was turned northward and commanded to backtrack to the flat mare basalts that form the floor of Le Monnier. It then continued eastward across the crater floor eventually encountering a 250 wide north-northeast trending rille named Fossa Recta (Straight Rille).

Lunokhod 2 drove off the lander to the northwest and circled around to the east. Several turns were made as the rover photographed the lander. It then departed and headed south.

The rover had to work its way down the rille wall and across the floor before finally climbing out on the east side. Lunokhod 2 continued north before reaching its final position. The mission officially ended on 4 June 1973 due to a failure of the rover. Apparently on 9 May, the rover’s lid touched a crater wall and become covered with fine-grained lunar regolith. That regolith was dumped onto the radiators when the lid closed. Subsequently, when the lid opened, the rover overheated and failed.

The scientific payload on the rover included three television cameras for navigation, four panoramic cameras, a cone penetrometer to test the lunar regolith, a solar X-ray experiment, a magnetometer, radiometer, and laser ranging retroreflector.
Examine the regional geology that Lunokhod 2 was exploring, HERE (hint: sample 4493, line 15645; look to the south for some spectacular rover tracks).

(I mean, on the map... it's correctly identified in the other images)

I'm glad someone was proofing this Phil. Have you let Dr. Robinson know or should we? (LOL)