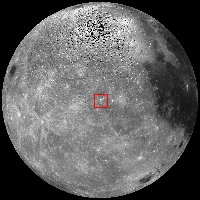 
Impact melt pits are a type of lunar feature now seen in many LROC NAC images. Today's Featured Image shows a newly discovered pit within the impact melt of a relatively small, unnamed crater with a diameter of ~10.8 km (located at 43.899°N, 235.679°E). The impact melt deposit in the crater floor is only ~2.5 km across. The pit is roughly circular with a diameter of ~16 meters. This diameter is smaller than the large pits found in mare basalt: the Mare Ingenii pit is ~130 m in diameter, the Marius Hills pit is ~65 m in diameter, and the Mare Tranquillitatis pit is ~100 m in diameter.


Higher sun angle (lower incidence angle) images allow scientists to calculate the depth of this impact melt pit. In the image above, two observations give a slightly different view of the main pit (blue arrow) and the irregular fracture (which could be a second pit) to the west (red arrow on the left), but the floor of the pit is not visible at either incidence angle.


Explore the entire NAC frame to see more of this exciting melt deposit!