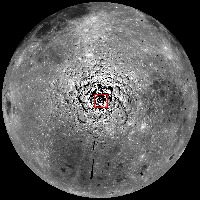 
Today marks the one thousand day anniversary of LROC imaging from lunar orbit. Since 30 June 2009, LROC has acquired a total of 750,000 images: of these, 140,000 are WAC images and 440,000 are NAC images of the illuminated Moon (the remainder are night or space calibration images). So far the NACs have imaged about 40% of the Moon. NAC and WAC images will play a key role defining where human and robotic explorers will go to unravel many remaining mysteries of the Moon and inner Solar System.

A look back - After the launch of LRO on 18 June 2009, Science Operations Center (SOC) operations at ASU commenced immediately, with the SOC monitoring the status of the instrument as our personnel supporting launch operations at the Cape Canaveral Air Force Station flew back to Phoenix. The first images we collected with the LROC system a few weeks later were actually engineering test images to ascertain hardware functionality, and most importantly, show how well the focusing of the NACs was proceeding. Why? Because the Narrow Angle Cameras (NAC) telescope structures were built out of carbon fiber, they absorbed atmospheric water vapor, which caused the carbon-fiber to expand. In effect, the NACs were built out-of-focus in the laboratory, with the knowledge that the water vapor would be driven out of the structure in space and thus shrink. Careful engineering by Malin Space Science Systems (MSSS) ensured that the shrinkage was just enough that the optical elements would move into position and the cameras would be in focus. Exposure to the vacuum of space and decontamination heaters built into the camera drove the moisture from the carbon fiber, thus bringing the cameras into focus in about two weeks.

The first LROC images were collected on 30 June. We started to commission the LROC instruments over the Fourth of July weekend in 2009. I think I can speak for the entire LROC team at ASU when I say that there is no better way to celebrate the Fourth of July than by commissioning an American spacecraft in lunar orbit. Working for any NASA spaceflight mission, especially one that is leading the way towards returning Americans to their rightful place on the lunar surface, is and always will be a special honor and a privilege for those fortunate enough to get the opportunity to contribute.


We were pleasantly surprised when our pre-launch estimates turned out to be a bit conservative, and our first pictures were completely in focus. I will always remember the thrill of seeing that first image come up on the screen, proving that everything we had been working on for several years was functioning. The LROC team promptly released many pictures of the lunar surface in the following few days. Today's Featured Image is a look back at our very first image of the Moon, which appropriately enough shows the rim of Shackleton crater, one of the current highest-priority sites for human exploration. Why is Shackleton so interesting? Small portions of its rim are nearly continuously illuminated while its interior is perpetually in darkness. The dark areas harbor a treasure trove of volatiles (water) that can be harvested to support future lunar explorers, provide important clues to the history of volatile materials in our Solar System, and enable voyages to Mars and beyond.

The Adventure Continues - We have since acquired other images of not only Shackleton, but many other sites on the Moon, providing the data that NASA and other space organizations worldwide require to facilitate scientific discovery, safe landing site selection, and resource assessment. In fact, we have mapped more than 40% of the lunar surface with the NACs since launch. The LRO mission is showing no signs of slowing down and LROC continues to enable new science results that are redefining our knowledge of the Moon. After entering the stable frozen orbit several months ago, LRO has enough fuel for at least another five years of operations, and our overriding goal on the LROC team is to map the whole Moon with the NACs before the end of the mission. We have mapped the Moon globally with the LROC WAC over 28 times. Each WAC global map was acquired with different lighting, thus providing a powerful multi-temporal tool to unravel the physics of light interactions with planetary surfaces.

LROC data have thus far enabled major advances in our understanding of lunar volcanism, impact processes, lunar tectonics, and the lunar environment, and the discoveries have just begun. The lunar science and exploration communities will be analyzing LROC data for decades to come.

The LROC team is proud of the work we have accomplished thus far, excited for the discoveries yet to be made, and feel privileged to contribute to America's first steps on the road back to the Moon. The LROC team at ASU is eager to make the next 1000 days of LROC operations as rewarding, exciting, and productive as the first 1000 days have been. The Moon, with its incredible bounty of exploitable resources, stunningly beautiful vistas, and incredibly compelling scientific questions, continues to beckon us towards the next horizon.

Take a look at the full frame of the first LROC NAC image of the Moon, HERE.
Posted by Joel Raupe at 1:19 AM