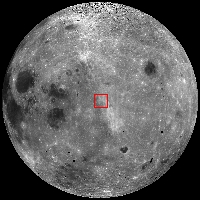 
The floor of this 3.5 km diameter crater (located at 9.900°N, 113.574°E) is covered with impact melt and boulders. At the time the LROC NAC took this image, the Sun was setting. One of the tallest boulders in the Featured Image was able to catch light from the setting Sun, although the rest of the surrounding terrain was already completely in shadow.

Why are shadows on the Moon so dark? Think about the case on Earth, where there is an atmosphere. Go outside on a sunny day and look into a shadowed area. Maybe it's the shadow of a large building, or maybe your own shadow! Is your shadow completely dark (like middle of the night with no Moon dark)? No, because our atmosphere scatters light into the shadow. However, if you were an astronaut on the Moon, your shadow would be as dark as night since there is no atmosphere. Aren't atmospheres great?