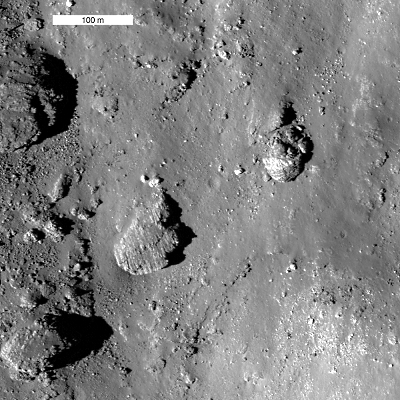 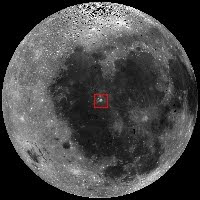 Aristarchus crater is located on the edge of the Aristarchus Plateau, one of the most geologically interesting regions of the Moon. It is a 40 km wide, 3.5 km deep, complex impact crater, which probably formed about 175 million years ago. The impact straddled the boundary of the plateau and the surrounding mare, thus excavating both very different rock types, as well as underlying crustal rocks. Previous posts have highlighted features of the Aristarchus Plateau, including Valles Schröteri and the pyroclastic deposits that blanket the plateau. Compositional differences within the central peak of the crater have also been noted, and highlight the importance of studying the geology of this crater. 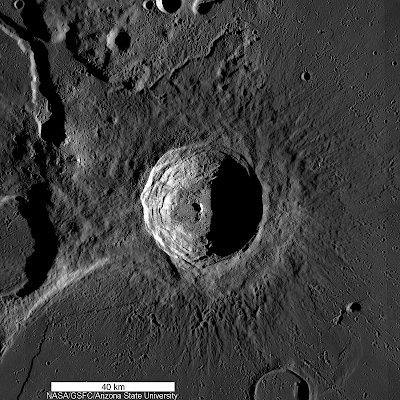 LROC Wide Angle Camera (WAC) mosaic of 40 km diameter Aristarchus (23.7°N, 312.6°E). Stratified blocks are presently only observed in the northeast portion of the crater. View the full-sized image release HERE [NASA/GSFC/Arizona State University].
On the northeastern slopes of Aristarchus, there are numerous large, stratified blocks of ejected material. These blocks are banded with alternating layers of light and dark material. Dark layers are typically less than 1 meter thick, and bright layers range between 1 and 10 meters thick. The boulders are randomly oriented, so they are not in their original position but rather appear to have tumbled down the wall of the crater from above. Unfortunately, no clear layers of rock are observed in the crater wall because it has been covered by impact melt and debris. Luckily, however, some stratified blocks are observed outside of the crater, and would be accessible for any future astronauts to sample. 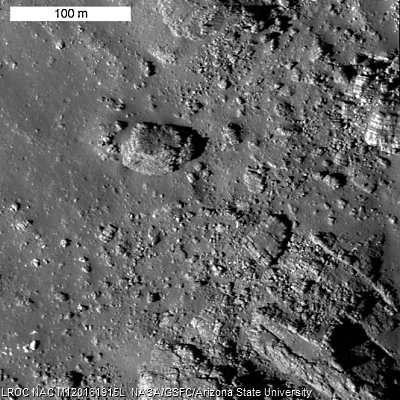 Close-up view of a second block field with prominent banding. Note the layering is also seen in blocks of many sizes, LROC NAC M120161915L [NASA/GSFC/Arizona State University].
At the present time, the blocks are only seen on the mare side of the original surface. Because of their low viscosity and ability to spread out, mare deposits may contain sequences of many thin (meters thick) layers, potentially representing pulses of magma that built up the mare. Because of their location in the crater, it may be that the layers seen in the blocks represent a successive deposition of lava flows. The difference in albedo of the layers (bright versus dark) is still being investigated, but could be due to such layering of lava (thick, bright layers) capped by layers of pyroclastic material (dark layers) erupted from vents on the nearby plateau. It more likely that the thin dark layers are vesiculated, glassy lava crusts that were quenched as the upper surfaces of the lava flows were exposed to the vacuum of space.

Compare the striated blocks with layers seen at Hadley Rille by astronauts Dave Scott and Jim Irwin on Apollo 15.
Striated ejecta blocks were also recently observed on the lunar farside, compare them with those seen at Aristarchus Crater. Layers are also seen in the walls of pit craters.

Explore the full resolution image, and look for more examples of striated blocks!
Posted by Joel Raupe at 10:46 PM