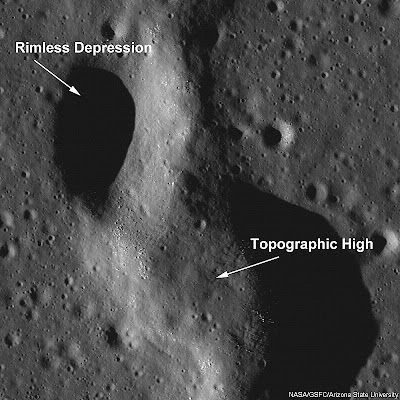 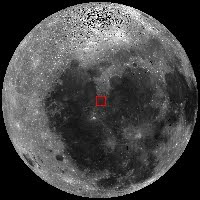 This unnamed sinuous chain of pits was suggested to be a collapsed lava tube (see Wilhelms' Geologic History of the Moon). New high resolution NAC images (e.g. M102443238R) provide a new look at the area. This particular feature transitions from a discontinuous sinuous rille into an equally discontinuous wrinkle ridge. 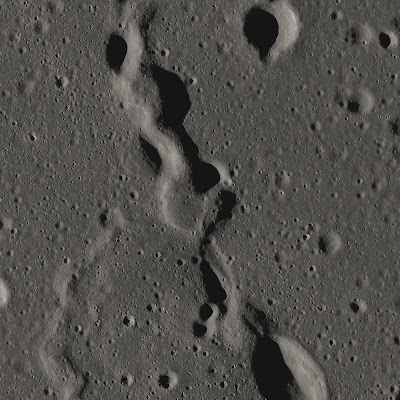 Future Spaceport? Near 35.34°N, 317.57°E, the "Rimae Gruithuisen" chain-rille complex might conceal overlapping 'sublunarian' lava channels, in a part of Oceanus Procellarum replete with the iron and titanium oxide proxies that might mark some of the Moon's deepest reserves of Helium-3, among other promising resources. One day, perhaps a city may spread along the 50 km length of the Gruithuisen chain rille, its residents at least as sheltered from solar storms and cosmic rays as anyone living at sea level on Earth. LROC NAC M102443238L&R, field of view ~5.8 km [NASA/GSFC/Arizona State University].
Some scientists have suggested that wrinkle ridge faults interact with lava tubes, with the wrinkle ridge exploiting a zone of mechanical weakness (the lava tube) in the preexisting basalt deposit. In this NAC image, the topographic depressions are non-circular, with collapse rims. Many of the pits have boulders on the interior walls. If these depressions were created by impacts, each pit would have a raised rim and an ejecta blanket. 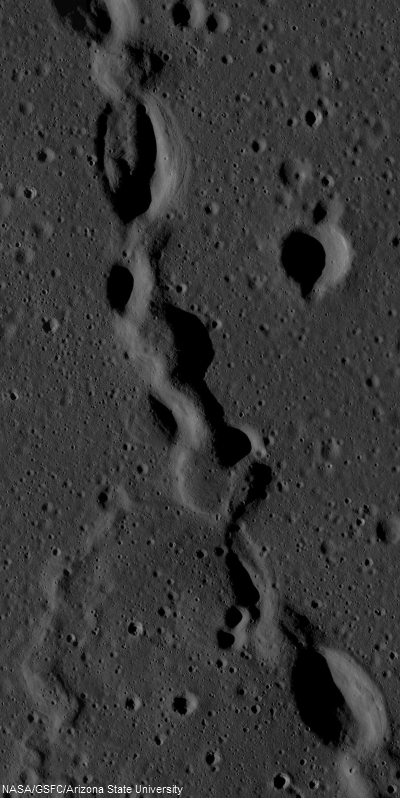 Pulling back from the Featured Image above for context, a roughly 5.8 km by 10 km segment lifted from the heart of a mosaic of both the left and right frames of NAC observation M102443238L & R, swept up early in the Commission Phase of the LROC mission (from an altitude of 155.57 km, LRO orbit 272, July 17, 2009 [NASA/GSFC/Arizona State University]. Full resolution desktop wallpaper.

Lava tube caves could be used during future human exploration for long-term habitation. Scientists first suggested drained lunar lava tubes as possible human habitats in 1962, and since then the possible lava tube caves have remained at the forefront of both geological debate and the future of a sustained human presence on the Moon. The lunar caves would be an ideal location for a lunar base because they a) require little construction and enable a habitat to be placed inside with a minimal amount of building, b) provide a natural environmental control (insulation and temperature stability), and c) provide protection from natural hazards (i.e., cosmic rays, meteorites, micrometeorite impacts, impact crater ejecta). On Earth, our atmosphere protects us from cancer-causing radiation, but the Moon has no atmosphere and therefore astronauts must find an alternate means of shelter, especially during times of high radiation, like solar flares and coronal mass ejections. 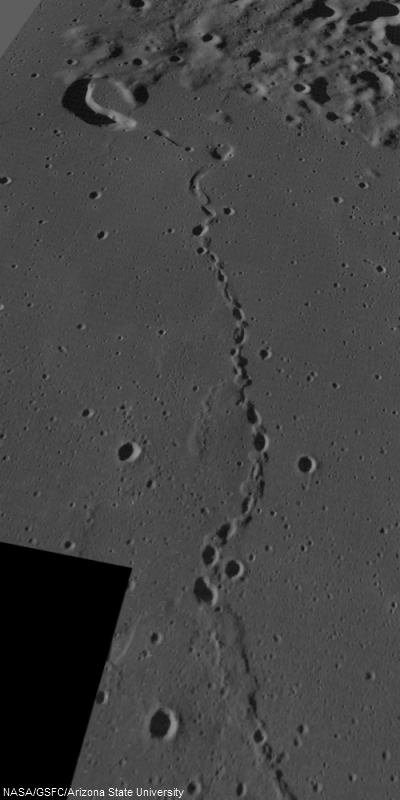 This section of LROC Wide Angle Camera (WAC) monochrome (689nm) mosaic (M117773324-M117780116ME, LRO orbit 2490-2491, January 10, 2010) shows the area where the feature transitions from a chain of collapse pits to a continuous uncollapsed segment. The large, bow-shaped depression at the northwest terminus of the chain may be a possible source region for the flow of lava across this region. The chain is ~50 km long (M117773324ME res. 58.9 m/pixel) View the Full-Sized Featured Image HERE [NASA/GSFC/Arizona State University].
Geologists suspect that lunar lava tubes form similarly to terrestrial lava tubes. However, lunar lava tubes are likely much larger, due to the lower gravity and the lack of an atmosphere. Studies of lava tubes on Earth show that most are hollow. If lunar lava tubes form in a similar way, then they too are most likely hollow. A lava tube may form when an active basaltic lava flow develops a continuous crust. For instance, an open lava channel may form a crust of hardened rock that extends from the sides and, over time, meets in the middle, forming a roof. Even if a lava tube develops a roof, it still has lava running through it. There is a possibility that the cooling lava would solidify inside the tube and block it. However, on Earth most lava tubes do not "plug up." As the rate of lava flowing from the source diminishes over time, the level of liquid in the tube drops, leaving an empty space between the top of the flow and the roof of the tube.
Browse the thrilling full-resolution NAC. 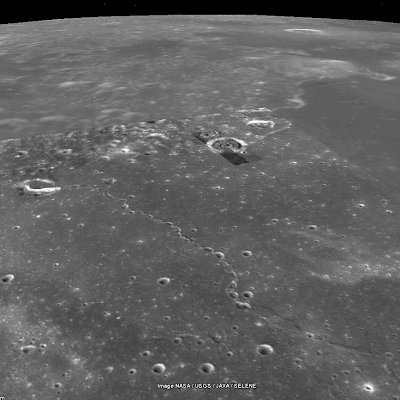 The featured chain rille imaged by the Terrain Camera aboard Japan's SELENE-1 ("Kaguya") in 2008, draped in its context within the Gruithuisen region of the lunar digital elevation model available to users of the Google Earth application [>v.5]. The rille is located in Oceanus Procellarum west of its contact with Mare Imbrium. Sinus Iridum is beyond the horizon at upper right and just below, the point marks the site of the Gruithuisen dome Region of Interest. The concentric crater, above center, is Gruithuisen K [JAXA/SELENE/NASA/GSFC/USGS/Google].
Posted by Joel Raupe at 11:28 AM