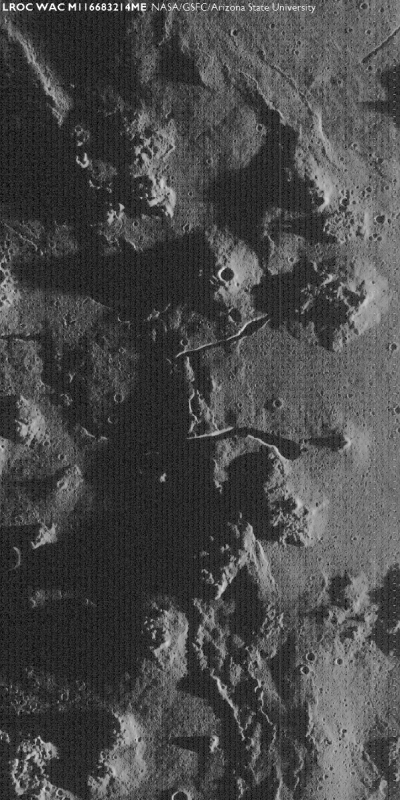 Introduction: Lunar domes have long held the interest of the lunar science community, but their origin and composition are still not well understood. Previous studies, using Lunar Orbiter, Apollo, Clementine, and LRO data, have proposed several formation mechanisms, and all agree that most lunar domes are volcanic features [1-9].

In anticipation of the 42nd Lunar & Planetary Science Conference, we continue highlighting some of the announced presentations related to lunar science:

These domes generally have steeper slopes, are high in silica and thorium [3,10,11], and low in iron and titanium [6]. In comparison, mare domes have shallow slopes, lower albedo, and generally weaker UV absorption, presumably due to lower-viscosity mare basalt [1].
Data Sources: NAC stereo pairs were reduced to DTMs with a posting of 2.0-5.0 m using standard photogrammetric techniques and were controlled to the LOLA reference frame [12]. The vertical precision error for the 2.0 m/post DTMs is less than 11 m, and the vertical precision error for the 5.0 m/post DTMs is typically less than 5 meters. The absolute accuracy of the DTM largely depends on the accuracy of the LOLA data, currently within 1 m radial [13] and 50 meters horizontal [14].

Figure 1 illustrates the topography and slopes of a dome in Compton-Belkovich as an example of the results. Figure 2 illustrates examples of the topographic profiles that can be extracted from the DTMs, in this case for Gruithuisen NW and Hortensius. Data for each of the domes examined are presented in Table 1. 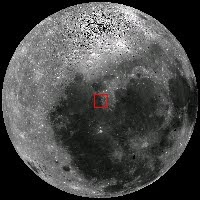 Results: Mairan T dome is located west of Mairan crater, is symmetrical in planform, and is interpreted to have originally formed on highland material and subsequently embayed by mare basalt [2]. Slopes on the flank range from 22° to 27° and have a well-defined contact with the mare. At the summit is a depression, ~3.8 km wide and up to 450 m deep, likely formed from collapse associated with magma withdrawal. The slope of the walls of the depression are 13° to 25° and the depression has a flat floor. 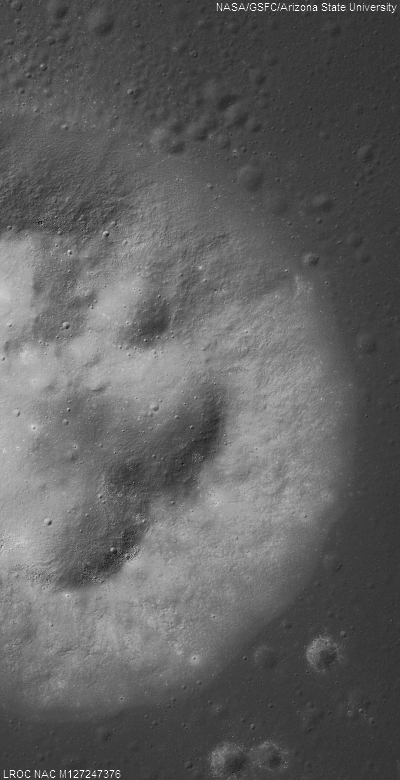 Highly reduced 10000 samples and 15000 lines of LROC Narrow Angle Camera observation M127247376LR (down to 400x800 resolution above) shows half of the Marian T dome and the eastern half of its steep slopes, rising ~770 meters from its contact with the Oceanus Procellarum floor. LRO orbit 3886, April 30, 2010 [NASA/GSFC/Arizona State University]. 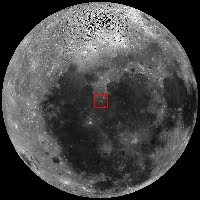 Gruithuisen NW dome is a small dome relative to Gruithuisen δ and Gruithuisen γ. The smaller dome is situated on highland material and is similar to Mairan T with slopes of 22° to 27°. The dome exhibits a summit plateau ~2.5 km in diameter. 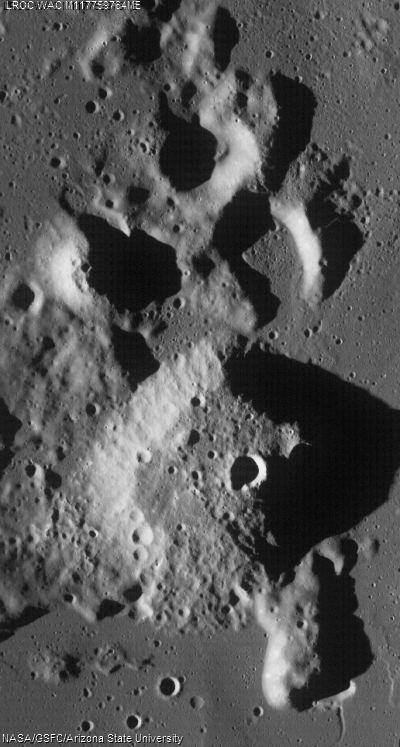 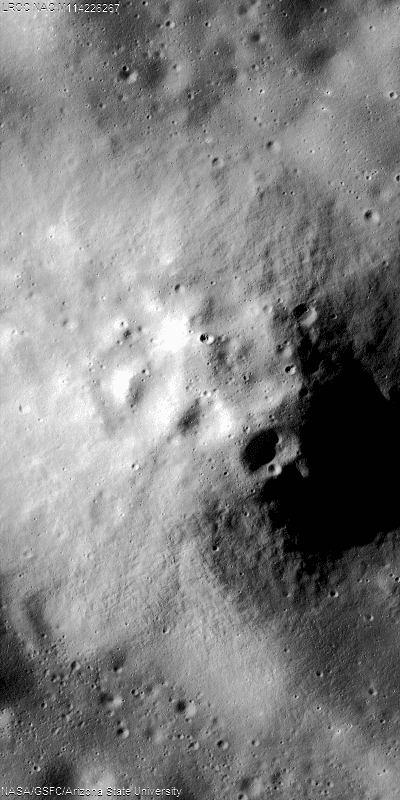 Another highly reduced (down to 400 x 800 from the 15000 x 10000 pixel original) close-up of the northwestern of the two domes in the WAC observation immediately above, this time a center slice of both the left and right frames of LROC NAC observation M114226267, LRO orbit 1967, November 30, 2009 [NASA/GSFC/Arizona State University].
The Compton-Belkovich region is a localized thorium anomaly located on a topographic rise between Compton and Belkovich craters [15]. The largest of several domes is located on the northern edge of the region. Its diameter is ~6.8 km, with a height of ~575 m from the southern base and ~950 m from the northern base. Flank slopes are generally 20° to 26° except on the northwest flank where slope gradually decreases from ~16° to 12-13°. Unlike the Gruithuisen NW and the Mairan T domes, where the dome has an abrupt change in slope near the base, this dome has a gradual change in slope, merging with the surrounding surface. 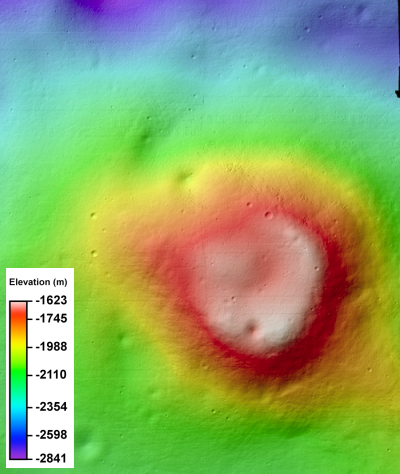 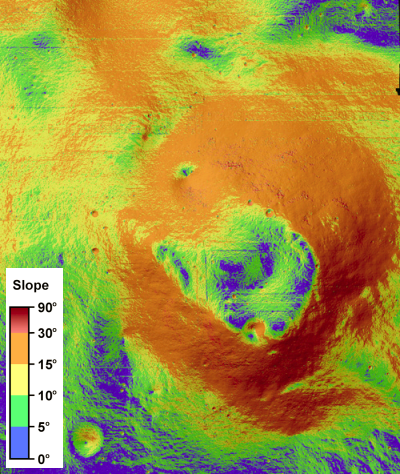 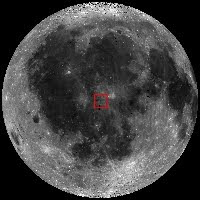 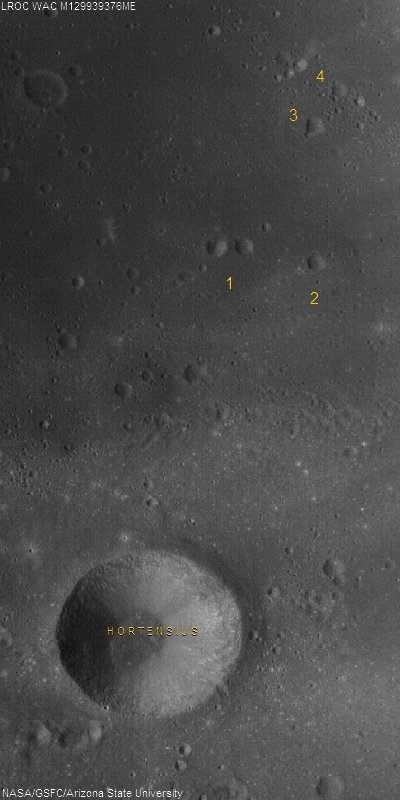 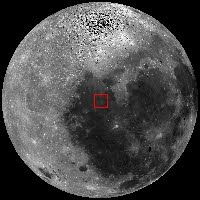 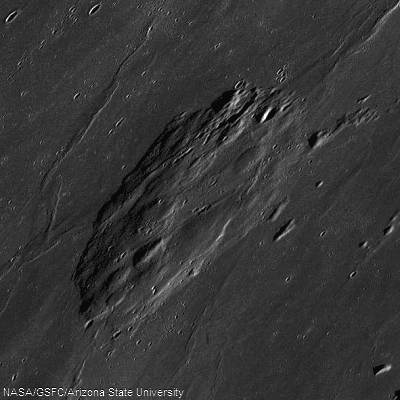 Necessarily foreshortened view of the Rümker Hills, in an idealized line-of-sight view from Earth, from the LROC WAC mosaic of the lunar nearside released February 21, 2011 [NASA/GSFC/Arizona State University]. 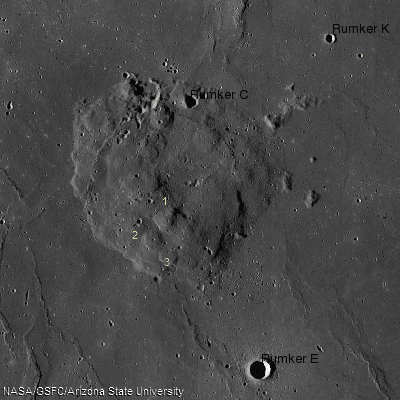 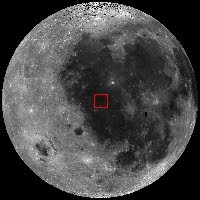 The Marius Hills complex, located in Oceanus Procellarum, has the largest concentration of volcanic features on the Moon [5,7,8]. The majority of domes are irregularly shaped, suggesting changes in lava composition or eruption rates (or both). Two domes were examined: Marius Hill 1 and 2. Both have irregular slopes varying between 5-23°. Both of the analyzed domes have a rough summit plateau; Marius Hills 1 has a smaller cone-like feature superimposed, possibly representing multiple vents, compositional changes, or variability in eruption rate. 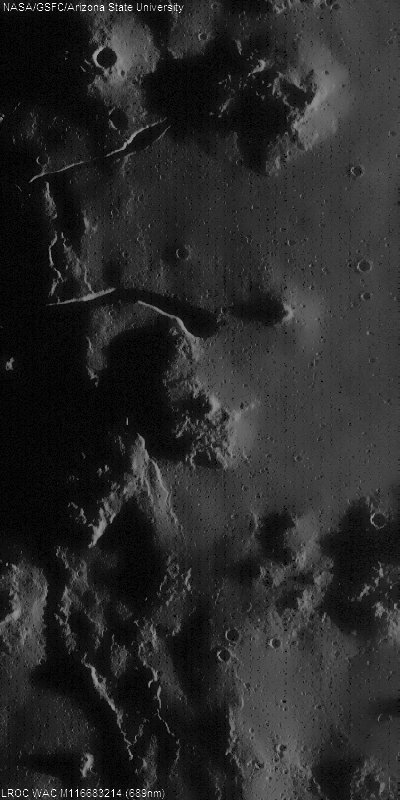 The heart of the Marius Hills (12.0°N, 306.0E°), the most extensive dome field on the Moon, identified by China's researchers as one enormous volcano dominating central Oceanus Procellarum. The largest two domes, are seen here south of the familiar sinuous rilles at local sunrise, LROC WAC monochrome (689nm) observation M116683214ME, LRO orbit 2329, December 29, 2009 [NASA/GSFC/Arizona State University].
Discussion: Flank slopes on the domes fall into two categories: steep (greater than 20°) and shallow (less than 10°). For terrestrial volcanic constructs [17], steep slopes are typically associated with relatively silicic (e.g., rhyolitic) domes such as those of the Owens Valley [18-20]. Shallow slopes are typically associated with low viscosity, basaltic-style eruptions. In fact, the mare domes may be more accurately referred to as low shields rather than as domes. The composition of all the lunar domes currently is not well understood. 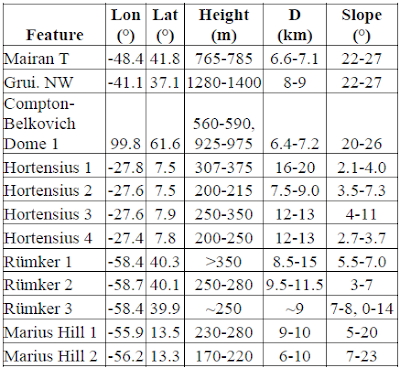 Table 1. Height is relief with respect to the surrounding terrain. D is average basal diameter. Slope is average flank slope measured across the width of the entire flank. 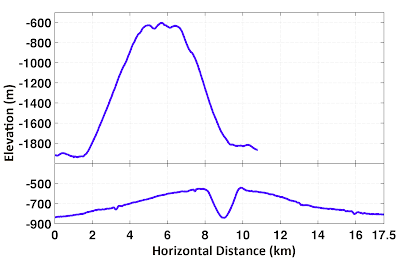