Over the coming weeks, in anticipation of the 42nd Lunar & Planetary Science Conference, we continue highlighting some of the announced presentations related to lunar science:

Methods: The LRO WAC acquires monochrome images using the 605 nm filter at a resolution of ~75 m/pix, and multi-spectral images at two ultraviolet (UV) and five visible (VIS) wavelengths (320, 360, 415, 565, 605, 645, and 690 nm) at a resolution of ~400 m/pix in the UV and ~75 m/pix in the visible [4]. The LRO NAC produces monochrome images at resolutions of ~0.5 m/pix [4]. We examined a preliminary 100 m/pix global monochrome WAC mosaic for dark deposits with morphologic indicators of pyroclastic origin, such as: mantle and subdue subjacent terrain exhibit diffuse margins do not embay adjacent topographic lows associated with rilles or possible vents
Our search has focused on locations in the LROC targeting database where the presence of pyroclastic materials was suspected, often because of their association with other volcanic deposits and/or fractures or rilles. These deposits were not well enough resolved in previous data sets to assess their mode of emplacement. For some locations, we processed and examined WAC color mosaics and/or high-resolution NAC images (if available for the target area) to look at additional details of mantling relationships, deposit textures, and possible volcanic vents. The NAC images are especially valuable for examining potential vents and assessing physical characteristics of the DMDs such as thickness, roughness, and rock abundance. 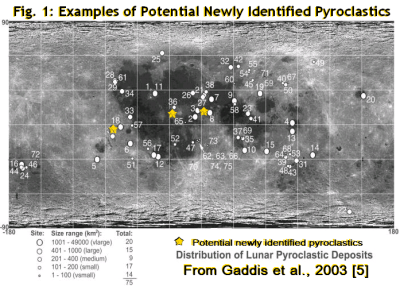 LPSC XLII (2434) Figure 1. Examples of potential newly identified pyroclastics [NASA/GSFC/Arizona State University]..
Results and Discussion: We have examined over 125 low-albedo deposits as part of this effort. Approximately half of these do not exhibit significant evidence of pyroclastic emplacement. For the remaining 64 deposits, in many instances it was not possible during our preliminary screening to make a definitive judgment as to whether the deposit has a pyroclastic component. Therefore, after eliminating locations for which a pyroclastic origin appears unlikely, we are classifying the remaining locations as either “possible” (44 deposits) or “probable” (20 deposits). “Possible” deposits generally have low albedo, lack sharp margins, and exhibit some evidence of mantling the local topography. In addition to these features, “probable” deposits typically either exhibit strong evidence of mantling or are associated with possible vents.
These potential newly identified pyroclastic depos-its are located primarily on the near side, in both the highlands and the maria. The most common setting is either highlands adjacent to maria or within basalt-flooded highlands craters. Three example locations are shown below; their locations are marked on Fig. 1.
1. Schluter crater (Fig. 2) – probable pyroclastic in basalt-flooded highlands crater
2. Montes Carpatus (Fig. 3) – possible pyroclastic in highlands adjacent to maria
3. NE Mare Vaporum (Fig. 4) – possible pyroclastic in maria
The deposits are usually found in areas exhibiting other evidence of volcanic activity (e.g. effusive deposits, rilles, domes, or possible vent structures). Suspected vents often appear as irregular depressions 1-2 km wide and 2-5 km long, although in some cases individual vents may be contained within larger depressions of possible tectonic origin. 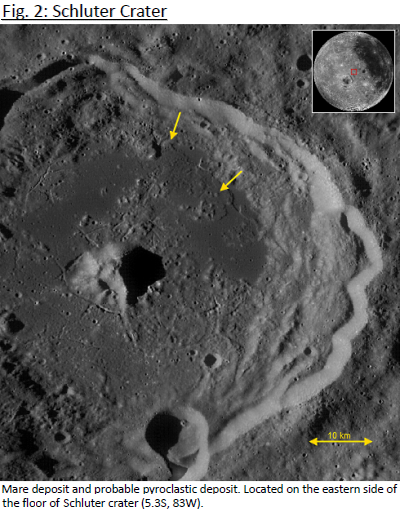 LPSC XLII (2434) Figure 2. Schluter crater (5.9°S, 276.7°E) from LROC WAC monochrome (643nm) observation M118037225ME, LRO orbit 2528, January 13, 2010 [NASA/GSFC/Arizona State University].
Conclusions and Future Work: Preliminary re-view of the LROC global monochrome WAC mosaic has indicated that there are numerous potential localized lunar pyroclastic deposits that have not been cataloged in previous surveys, most likely due to their small size or subtle features. LROC color WAC and high-resolution NAC images provide the means to study these deposits in greater detail, revealing small deposits, thin mantling layers, and potential vents [6]. Potential newly identified pyroclastic deposits identified so far are concentrated on the near side, in both highlands and maria. Consistent with previous studies, they are typically found near the margins of basins and in floor-fractured craters. These deposits are usually found in areas exhibiting other evidence of volcanic activity. 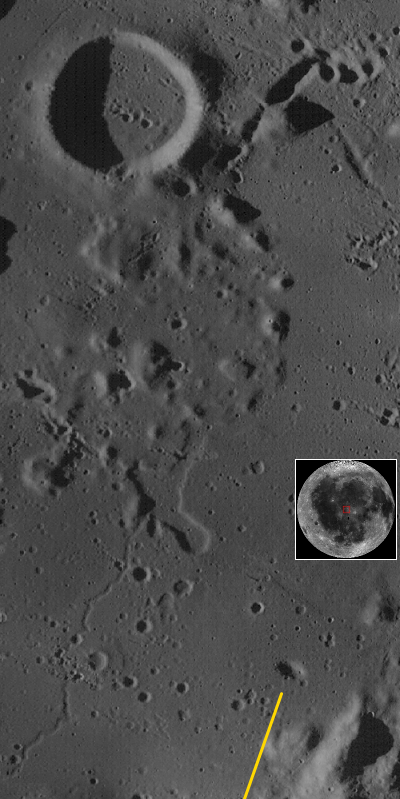 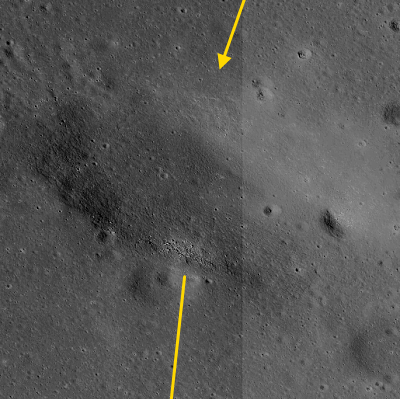 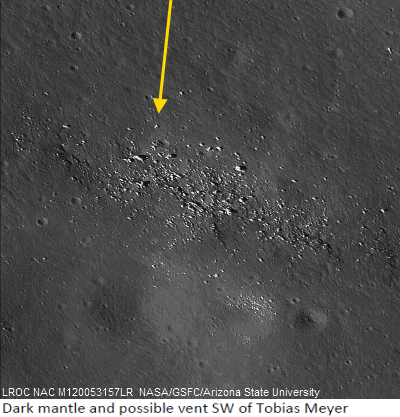 LPSC XLII (#2434) Figure 3. Closing in on the target from the context of the image at the beginning of this post (LROC WAC monochrome (689nm) observation M117691527ME) and well into the LROC Narrow Angle Camera observation M120053157, LROC orbit 2826, Feb. 5, 2010 [NASA/GSFC/Arizona State University].
We plan to continue our search for potential pyroclastic deposits using the monochrome WAC mosaic, focusing on regions for which there were gores in coverage in the initial products. Promising locations will be further evaluated using color WAC and NAC data to confirm the pyroclastic nature and study physical characteristics of these deposits. For selected deposits, we intend to apply methods used in earlier studies of lunar pyroclastic deposits with Clementine spectral reflectance (CSR) data (e.g., [5]), and to explore the potential of LRO WAC data to complement the CSR data for compositional analyses. We will apply these combined data to characterize inter-deposit and intra-deposit variations in order to test hypotheses regarding the formation of localized lunar pyroclastic deposits, including 1) that localized pyroclastic deposit characteristics (e.g. areal extent, volume, composition, and vent configuration) are primarily related to the geologic setting, and 2) that adjacent pyroclastic and effusive deposits are likely related to a common source. 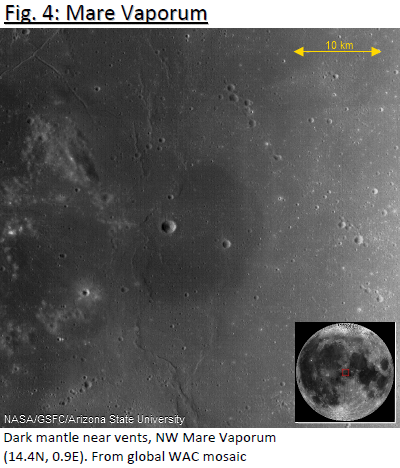