Catena Mendeleev is a linear crater chain probably formed by the impact of fragments (called 'secondaries' by planetary scientists) that were ejected by the impact that formed Tsiolkovskiy Crater, 850 kilometers to the southwest of Mendeleev. Crater chains form from secondary impacts ejected radially from their parent impact.

Today's Featured Image shows the rough and smooth textures on the inside of one of these secondary impacts. Secondary craters in a chain are often elongate in shape, with irregular rims. Secondary crater chains tend to occur in a zone immediately surrounding a large primary crater. However, larger impacts can move significant amounts of ejecta, including crater chains, far from the primary crater, as we see here at Catena Mendeleev. 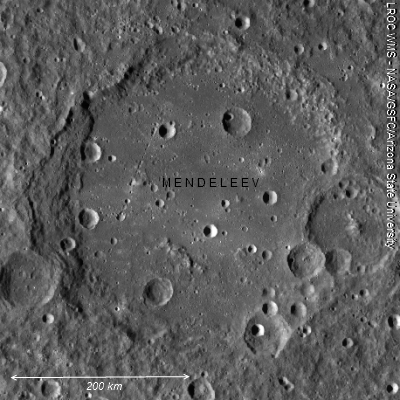 Backing away further from the field of view above allows for even more context, using the LROC WMS Image Map. The full-extent of the relatively flat interior of 313km-wide Mendeleev in comparison with the rolling highlands typical of the lunar farside comes into view [NASA/GSFC/Arizona State University].
Browse the full NAC frame to explore the craters in Catena Mendeleev!