Over the coming weeks, in anticipation of the 42nd Lunar & Planetary Science Conference, we are again this year highlighting some of the announced presentations related to lunar science: 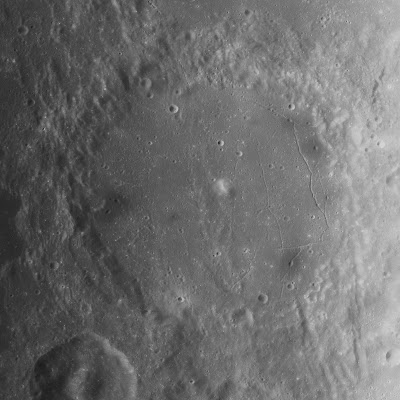 Familiar nearside landmark 121km Alphonsus, near 13.4°S, 357.2°E. LROC Wide Angle monochrome (643nm) mosaic composed from images swept up by the LROC Wide Angle Camera in four successive orbital flyovers on February 4, 2010. Most of what is known of small pyroclastic vents and their association with the dark mantling material surrounding them comes from study of this crater, well-placed for study from Earth on the Moon's central meridian. Recently analysis of recent high-resolution data has uncovered at least two previously unrecognized vents in the floor of Alphonsus [NASA/GSFC/Arizona State University]. 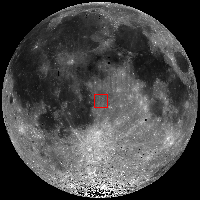 Overview: Dark-halo craters located along fractures in the floor of Alphonsus crater (108 km dia.; ~13ºS/357ºE) are considered type localities of small lunar pyroclastic deposits based on association of dark mantling material with likely cone-shaped source vents. Much of our understanding of the physical processes involved in smaller pyroclastic eruptions on the Moon comes from morphometric analyses of deposit volumes in Alphonsus crater performed by Head and Wilson [1]. These authors used high-resolution photographs and topographic maps to map the distribution and measure volumes of materials in the pyroclastic cones. They identified juvenile materials in all but one of the “dark halo” crater deposits. This study presents evidence for at least two previously unrecognized vents in the floor of Alphonsus crater. Results suggest that many such features and associated pyroclastic deposits are likely to be identified with the wealth of new lunar remote sensing data [e.g., 2, 3, 4].

Geologic Setting: Alphonsus is a Lower Imbrian-age crater located in the highlands east of the Upper Imbrian-age Mare Nubium [5]. The crater has a ~flat, cratered floor, a central peak, and a broad rim (Figure 1). Numerous linear rilles dissect the crater floor and dark-halo craters are located along and adjacent to the rilles, suggesting that the fractures provided preferential pathways for dike emplacement, volatile accumulation and subsequent pyroclastic eruption. Eleven dark-halo craters were mapped previously within Alphonsus [1]; ten of these are located within 25 km of the basin rim. These dark halo craters are characterized by non-circular rims. 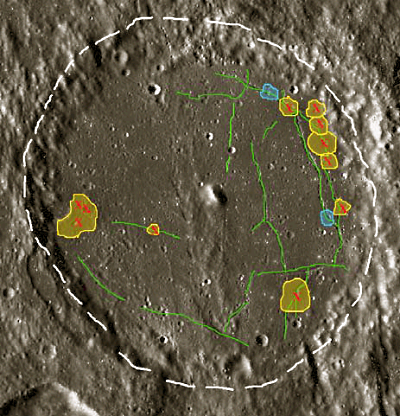 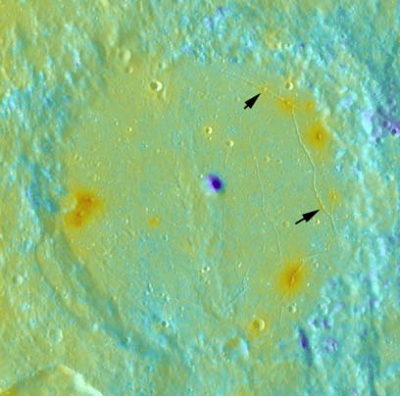 LPSC XLII (2011) 2691 Figure 2. Alphonsus crater viewed by Kaguya Terrain Camera evening mosaic with superimposed false-color Clementine derived iron-oxide (Lucey, et al., 2000). Yellow tones show enhanced iron content, arrows mark the sites of two possible newly identified pyroclastic deposits [JAXA/SELENE/NASA/DOD/USGS].
The northeastern feature is centered on a group of irregular depressions (Figure 3a) located along a rille NW of Ravi cone [1], a previously recognized pyroclastic deposit. The northeastern deposit has a moderate albedo, extends ~4 km across, and has occasional darker portions that drape and mantle the margins of the host depressions (Figure 4). The east-central deposit (Figure 3b) is centered on a small depression west of deposit 6 of [1], has an even higher albedo, and extends ~2 km across. Both possible vent depressions straddle linear rilles. These characteristics resemble those of other nearby deposits and support a pyroclastic origin for these features.
Summary: Two possible newly identified pyroclastic deposits have been recognized in the floor of Alphonsus crater. The moderate albedo of these deposits and their small size likely precluded earlier identification. New high-resolution image data [2, 3] allow more detailed analysis of the lunar surface and will likely support identification of many such features [e.g., 4]. These results suggest that pyroclastic deposits are likely to be even more widespread than previously recognized [e.g., 8, 9]. 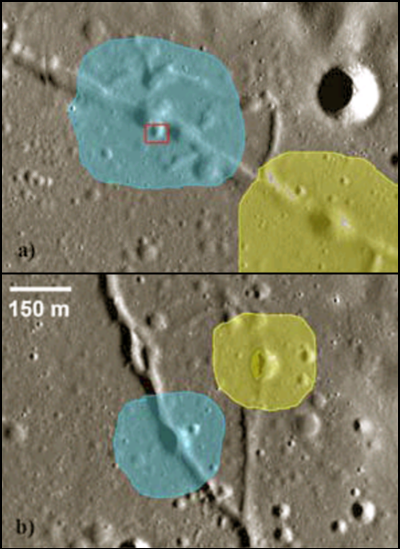 LPSC XVII (2011) 2691 Figure 3. Possible newly identified "dark halo" deposits (blue) in (a.) northeastern and (b.) eastern floor of Alphonsus crater. Both are near previously recognized deposits (yellow). Box in (a.) marks location of Figure 4 view. Views from the Kaguya Terrain Camera evening mosaic at same scale; north is up [JAXA/SELENE].