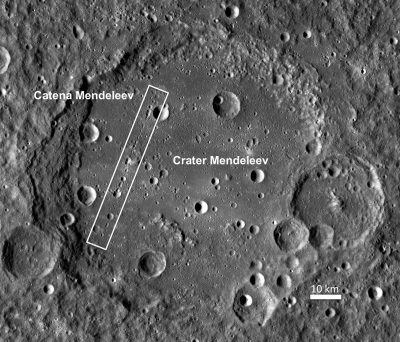 Mendeleev crater (named after Dimitri Mendeleev, the inventor of the periodic table of elements) is a very large, Nectarian-age crater on the lunar farside (5.7°N, 140.9°E). Approximately 313 kilometers in diameter, it is almost large enough to be a small basin. The interior contains many younger craters, including Catena Mendeleev, but also features a very smooth floor filled in with a light plains material. In general, this material is characterized by its smooth surface and intermediate albedo (brighter than basaltic mare material, but not as bright as highlands material). Light plains are found elsewhere on the Moon, most notably in the Cayley formation, the Apollo 16 landing site. Light plains are usually thought to be emplaced as large scale grounding flows of ejecta from large basin forming impacts. However details of this formation mechanism are still not well understood. 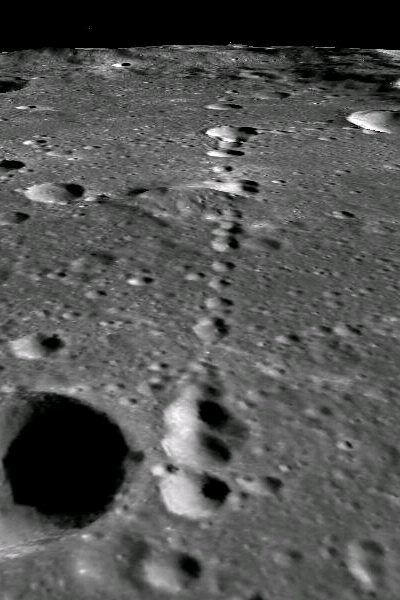 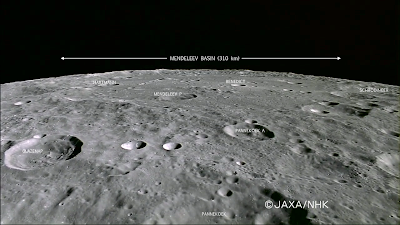 In 2007, Japan's robust first lunar orbiter SELENE-1 ("Kaguya") took high color High Definition television views from orbit, including this still of Mendeleev from around 100 kilometers above and several hundred to the south, as all of the 313 km crater lingered momentarily on the orbital horizon. Click HERE to see the full-sized image [JAXA/NHK].
Posted by Joel Raupe at 6:56 PM