LRO-Diviner: Widespread water on the Moon

Scientists from NASA’s Diviner Lunar Radiometer Experiment team published research in this week’s issue of Science that points to the widespread presence of water ice in large areas of the lunar south pole.

The Diviner Lunar Radiometer aboard NASA’s Lunar Reconnaissance Orbiter (LRO) has made the first-ever infrared measurements of temperatures in the permanently shadowed craters at the lunar poles. In October 2009, Diviner also made the first infrared observations of a controlled planetary impact when LCROSS, the companion spacecraft to LRO, slammed into one of the coldest of these craters in an experiment to confirm the presence of absence of water ice.
David Paige, Principal Investigator of the instrument, and lead author of one of two Science papers based on its observations, used temperature measurements of the lunar south pole obtained by Diviner to model the stability of water ice both at and near the surface.

“The temperatures inside these permanently-shadowed craters are even colder than we had expected. Our model results indicate that in these extreme cold conditions, surface deposits of water ice would almost certainly be stable,” says Paige, “but perhaps more significantly, these areas are surrounded by much larger permafrost regions where ice could be stable just beneath the surface.”

This lunar ‘permafrost’ would be analogous to the high-latitude terrain found on the Earth and on Mars, where sub-freezing temperatures persist below the surface throughout the year.

“These permafrost regions may receive direct sunlight at certain times of the year, but they maintain annual maximum subsurface temperatures that are sufficiently cold to prevent significant amounts of ice from vaporizing,” says Paige.

Given that these lunar permafrost regions are not in permanent shadow, surface lighting and thermal conditions in these locations would be far more hospitable for humans, which makes them of prime interest for future manned missions to the moon. Subsurface water ice deposits are also likely to be more stable than surface deposits of water ice because they are protected from bombardment by ultraviolet radiation and energetic cosmic particles.

“We conclude that large areas of the lunar south pole are cold enough to trap not only water ice, but other volatile compounds (substances with low boiling points) such as sulphur dioxide, carbon dioxide, formaldehyde, ammonia, methanol, mercury and sodium.” 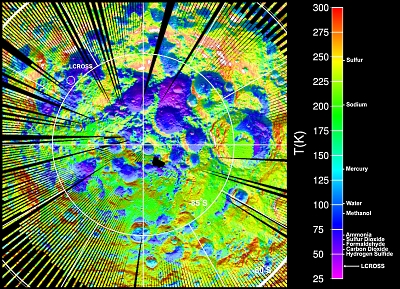 A representative cross-section of these substances was detected by the LCROSS near-infrared spectrometers when its upper stage rocket impacted into Cabeus crater, ejecting a host of material that was previously buried beneath its surface.

The impact site was situated within a permanently-shadowed part of Cabeus with an average annual temperature of 37 K (-393 °F), making it one of the coldest locations near the lunar south pole. Temperature data from Diviner played a key role in the selection of Cabeus as the target for LCROSS, and when it came time for impact, Diviner scientists and engineers made sure that the instrument had a front row seat: Diviner targeted the impact site for 8 orbits spaced roughly 2 hours apart, the closest of which was timed to pass by 90 seconds after impact. It observed an enhanced thermal signal on this and two subsequent orbits.

Paul Hayne, UCLA graduate student and lead author of the second paper appearing in Science, was monitoring the data in real-time as it was sent back from Diviner.

“During the fly-by 90 seconds after impact, all seven of Diviner’s infrared channels measured an enhanced thermal signal from the crater. The more sensitive of its two solar channels also measured the thermal signal, along with reflected sunlight from the impact plume. Two hours later, the three longest wavelength channels picked up the signal, and after four hours only one channel detected anything above the background temperature.” 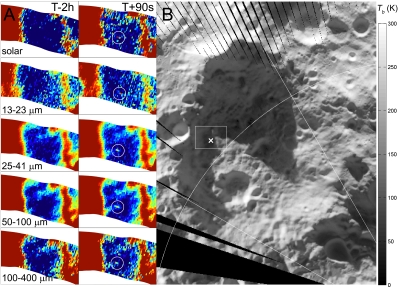 Diviner brightness temperature measurements of the lunar surface near the LCROSS impact site in Cabeus crater. (A) Before and after images of the LCROSS impact site in each of five different Diviner channels, with the thermal emission from the impact circled in the right-hand column, taken approximately 90 seconds after the Centaur impacted the lunar surface. (B) Pre-impact surface temperatures in Cabeus crater recorded by Diviner indicate the LCROSS impact site ('x') was only 40 degrees Celsius above absolute zero just before the impact . See full-sized illustration, HERE. [Science]
Scientists were able to learn two things from these measurements: firstly, they were able to constrain the mass of material that was ejected outwards into space from the impact crater; secondly, they were able to infer the initial temperature and make estimates about the effects of ice in the soil on the observed cooling behavior.

“Diviner’s solar channel measured scattered sunlight from the impact plume over an area of 140 km2 (54 sq mi). Using this measurement we were able to place constraints on the mass of the cloud at between 1,200 kg and 5,800 kg (2,700 - 12,800 lbs), which is consistent with measurements by the LCROSS Shepherding Spacecraft,” says Hayne. “This is important because the cloud mass is used to estimate the abundance of water observed by the LCROSS spectrometers.”

“In addition, we determined that in order to agree with the data from each of Diviner’s channels, the impact must have heated a region of 30 to 200 m2 (320 – 2150 ft2) to at least 950 K (1250 °F). This concentrated region was surrounded by a larger, lower temperature component that would have included the surrounding blanket of material excavated by the impact.”

Given that ice within soil pore spaces influences cooling because it uses up heat energy in the process of sublimating, and conducts heat more efficiently than lunar soil does, scientists were able to use Diviner’s measurements of cooling at the impact site to place constraints on the proportion of volatiles present.

“The fact that heated material was still visible to Diviner after four hours indicates LCROSS did not hit a skating rink; the ice must have been mixed within the soil,” says Hayne, “we estimate that for an area of 30 to 200 m2, the steaming crater could produce more than enough water vapor to account for what was observed by LCROSS over a four minute period.”

“Although Cabeus crater is typical of the coldest areas on the moon today, we have determined that billions of years ago, smaller craters with steeper walls would have made more favorable cold-traps,” says Paige, “it is therefore possible that the craters which have accumulated the most ice are not the coldest ones.”
The results presented in both papers represent strong evidence in support of the theory that volatiles have been delivered to the moon by impacts by icy bodies from the outer solar system and then ‘cold-trapped’ at the lunar poles.

The research covered here is from two of six papers published in Science by scientists from LCROSS and LRO. The research was funded by NASA.
Posted by Joel Raupe at 5:56 PM