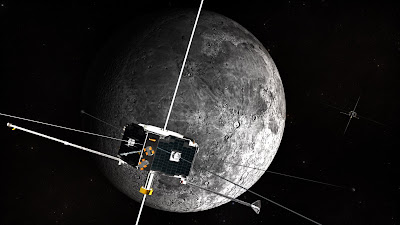 Artist's concept of ARTEMIS A and B (formally THEMIS-P1 and P2), after a circuitous, low-energy orbital transfer resembling a year-long round of pin-ball - back and forth many times between Lagrange points, finally in lunar orbit on a new and important mission. (A full-sized view is available HERE.) Flight Dynamics data from ARTEMIS P2 recently indicated one electric field instrument end-effector may have been struck by a meteoroid [NASA/UCLA].
Tony Phillips
Science@NASA

In 2007 NASA launched a fleet of five spacecraft into Earth's magnetosphere to study the physics of geomagnetic storms. Collectively, they were called THEMIS, short for "Time History of Events and Macroscale Interactions during Substorms." P1 and P2 were the outermost members of the quintet.
Working together, the probes quickly discovered a cornucopia of previously unknown phenomena such as colliding auroras, magnetic spacequakes, and plasma bullets shooting up and down Earth’s magnetic tail. This has allowed researchers to solve several longstanding mysteries of the Northern Lights.
The mission was going splendidly, except for one thing: Occasionally, P1 and P2 would pass through the shadow of Earth. The solar powered spacecraft were designed to go without sunlight for as much as three hours at a time, so a small amount of shadowing was no problem. But as the mission wore on, their orbits evolved and by 2009 the pair was spending as much as 8 hours a day in the dark.
"The two spacecraft were running out of power and freezing to death," says Angelopoulos. "We had to do something to save them."
The team brainstormed a solution. Because the mission had gone so well, the spacecraft still had an ample supply of fuel--enough to go to the Moon. "We could do some great science from lunar orbit," he says. NASA approved the trip and in late 2009, P1 and P2 headed away from the shadows of Earth.
With a new destination, the mission needed a new name. The team selected ARTEMIS, the Greek goddess of the Moon. It also stands for "Acceleration, Reconnection, Turbulence and Electrodynamics of the Moon’s Interaction with the Sun."
The first big events of the ARTEMIS mission are underway now. On August 25, 2010, ARTEMIS-P1 reached the L2 Lagrange point on the far side of the Moon. Following close behind, ARTEMIS-P2 entered the opposite L1 Lagrange point on Oct. 22nd. Lagrange points are places where the gravity of Earth and Moon balance, creating a sort of gravitational parking spot for spacecraft. 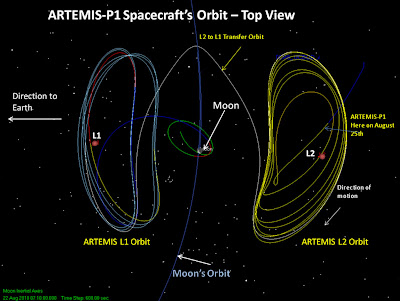 The ARTEMIS spacecraft are currently located at the L1 and L2 Earth-Moon Lagrange points. ARTEMIS-P1 is the first spacecraft to navigate to and perform stationkeeping operations around the Earth-Moon L1 and L2 Lagrangian points. A full-size view is available HERE, and a YouTube demonstration of the route taken to the new mission can be seen HERE [NASA/GSFC/UCLA].
"We're exploring the Earth-Moon Lagrange points for the first time," says Manfred Bester, Mission Operations Manager from the University of California at Berkeley, where the mission is operated. "No other spacecraft have orbited there."
Because they lie just outside Earth's magnetosphere, Lagrange points are excellent places to study the solar wind. Sensors onboard the ARTEMIS probes will have in situ access to solar wind streams and storm clouds as they approach our planet—a possible boon to space weather forecasters. Moreover, working from opposite Lagrange points, the two spacecraft will be able to measure solar wind turbulence on scales never sampled by previous missions.
"ARTEMIS is going to give us a fundamental new understanding of the solar wind," predicts David Sibeck, ARTEMIS project scientist at the Goddard Space Flight Center. "And that's just for starters."
ARTEMIS will also explore the Moon's plasma wake—a turbulent cavity carved out of the solar wind by the Moon itself, akin to the wake just behind a speedboat. Sibeck says "this is a giant natural laboratory filled with a whole zoo of plasma waves waiting to be discovered and studied."
Another target of the ARTEMIS mission is Earth's magnetotail. Like a wind sock at a breezy airport, Earth's magnetic field is elongated by the action of the solar wind, forming a tail that stretches to the orbit of the Moon and beyond. Once a month around the time of the full Moon, the ARTEMIS probes will follow the Moon through the magnetotail for in situ observations.

"Orbiting the Moon is notoriously tricky, however, because of irregularities in the lunar gravitational field."

"We are particularly hoping to catch some magnetic reconnection events," says Sibeck. "These are explosions in Earth's magnetotail that mimic solar flares--albeit on a much smaller scale." ARTEMIS might even see giant 'plasmoids' accelerated by the explosions hitting the Moon during magnetic storms.
These far-out explorations may have down-to-Earth applications. Plasma waves and reconnection events pop up on Earth, e.g., in experimental fusion chambers. Fundamental discoveries by ARTEMIS could help advance research in the area of clean renewable energy.
After six months at the Lagrange points, ARTEMIS will move in closer to the Moon—at first only 100 km from the surface and eventually even less than that. From point-blank range, the spacecraft will look to see what the solar wind does to a rocky world when there's no magnetic field to protect it.
"Earth is protected from solar wind by the planetary magnetic field," explains Angelopolous. "The Moon, on the other hand, is utterly exposed. It has no global magnetism."
Studying how the solar wind electrifies, alters and erodes the Moon's surface could reveal valuable information for future explorers and give planetary scientists a hint of what's happening on other unmagnetized worlds around the solar system.
Orbiting the Moon is notoriously tricky, however, because of irregularities in the lunar gravitational field. Enormous concentrations of mass (mascons) hiding just below the surface tug on spacecraft in unexpected ways, causing them over time to veer out of orbit. ARTEMIS will mitigate this problem using highly elongated orbits ranging from tens of km to 18,000 km.
"We'll only be near the lunar surface for a brief time each orbit (accumulating a sizable dataset over the years)," explains Angelopoulos. "Most of the time we'll linger 18,000 km away where we can continue our studies of the solar wind at a safe distance."
The Dead Spacecraft Walking may have a long life ahead, after all.