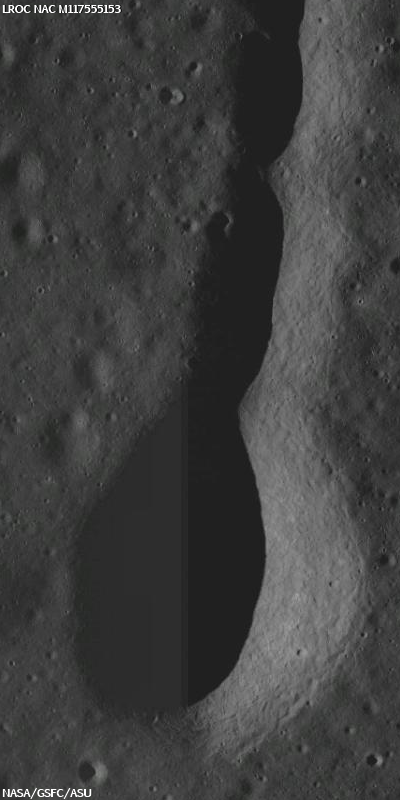 Cobra's Head of Rima Birt - An uncorrected montage of the left and right frames of LROC Narrow Angle Camera observation M177555153 (Resolution = 67 cm per pixel, from 42.1 km; LRO orbit 2457, January 8, 2010). One of two Lunar Reconnaissance Orbiter Camera (LROC) NAC images in the Second Release to the Planetary Data System that put a new and extraordinary light on a familiar Near Side feature and its surroundings. The observation above, of the cobra head of Rima Birt was imaged in the local evening Sun, only 8 degrees above the western horizon and making the interior of the Rima appear deceptively deep. The distance from the eastern edge of that interior shadow and the feature rim to its east (right) is approximately 800 meters [NASA/GSFC/Arizona State University]. 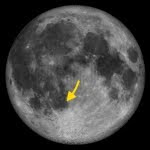 We're grateful to Chuck Wood once again, erstwhile curator of Lunar Picture of the Day (LPOD) for being first to call our attention to the latest, now relatively rare, addition to the Kaguya Image Gallery.

On Wednesday, July 7, under the headline "Wow," Chuck linked to a JAXA MPEG calling it "a remarkable digital flyover of the Straight Wall area" of southeast Mare Nubium.

Though previously available via the JAXA Channel on YouTube, the MPEG rendition of Terrain Camera data gathered by Japan's first lunar orbiter provides better resolution, and it's just as breathtaking.

JAXA (Kaguya/SELENE-1) Terrain Camera and laser altimeter data made possible this virtual view south along the long length of Rupes Recta, part of a remarkable video flyover tour of the area released to the Kaguya Image Gallery, July 5, 2010. The rim of 17km diameter Birt crater rises above the west plain, dominating the southern horizon [JAXA/SELENE]. 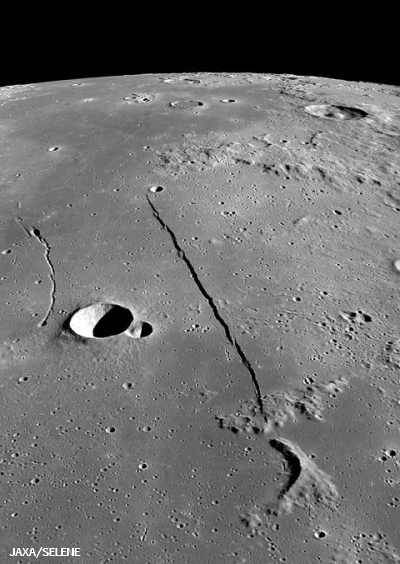 For scale, the Cobra Head of Rima Birt at the top of this posting can be seen here at center left, in this view from Japan's SELENE-1 lunar orbiter over southwest Mare Nubium. Immediately to east of Rima Birt is 17 km Birt crater, with it's relatively steep slopes supporting Birt A. On the right is the 134 km Rupes Recta, the "Straight Wall." The first HDTV camera to orbit the Moon also flew on Kaguya that swept up more than one outstanding view of the area. Late mission Kaguya HDTV showed the region from progressively lower orbits.
Chuck Wood, author of The Modern Moon: A Personal View (Sky Publishing, 2004), is to be congratulated for reminding us to search through the recent Second Release of LROC images to look for any LRO Narrow Angle Camera close-ups of Rupes Recta, the famous "Straight Wall." A search after the First Release in March turned up nothing, other than preliminary unformatted Wide Angle Camera sessions.

Despite their very real scientific value, their precision and beauty, LROC Wide Angle Camera observations are worth waiting for.

The Rupes Recta region, near the center of the Near Side as seen from Earth, is among the most observed and photographed areas of the Moon. Few are the amateur astronomers on Earth, usually after acquiring their probably more powerful second telescope, who hasn't marveled at their first naked eye view of "Huygens' Sword," or "the Railroad," the 134km long, 490 meter high rift, roughly centered 22.1°S, 352.2°E. 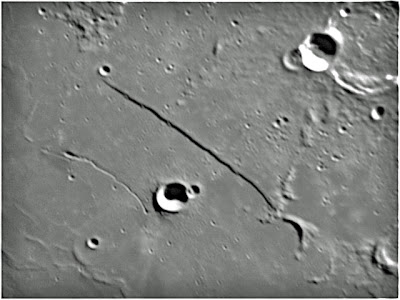 Le Mur droit - An example of the quality of "amateur" photographs of Straight Wall region, as seen from Earth. The area was the subject of "Ancient Thebit and Huygens' Sword," by Charles A. Wood, Sky & Telecope [LPOD/January 11, 2004].. 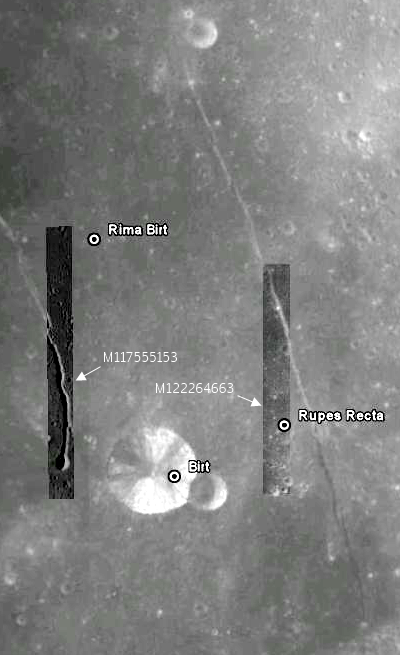 Our second search of the PDS uncovered two strategically placed LROC Narrow Angle Camera observations, extreme close-ups of noted features, in the vicinity of the Straight Wall (leaving us hungry for more).

Each was gathered in the First Quarter of 2010, and were therefore among those observations in the Second Release of LRO photograpy from LRO announced by LROC principal investigator Marc Robinson, June 21.

One is of the southern half of Rima Birt, and it provided the montage at the top of this post. The cobra head feature can be compared with other less-detailed views of this feature in this post. A second image, viewed in a high sun, has the relief in the long shadows of early morning and late afternoon, slices directly through the Wall's center. 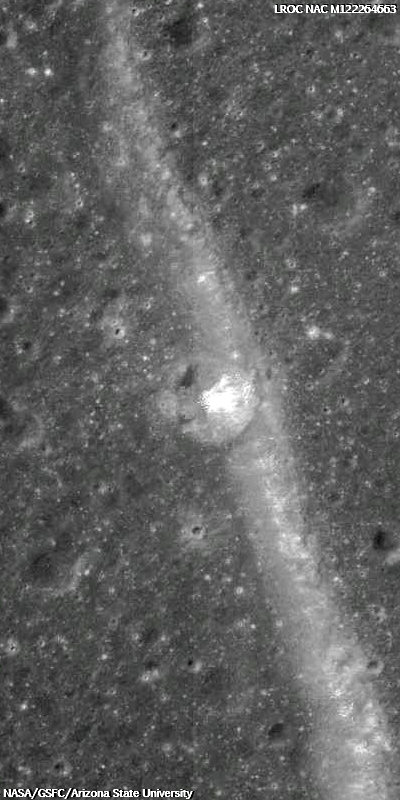 An angled slice through the heart of the Rupes Recta, under a higher Sun (f=33.44° in LRO orbit 3151, March 3, 2010). The 700 meter crater at center predates the rift, and it may have witnessed a gentle transition to its present state. The bright feature on it's eastern interior (see below) is a slide of material once on it's east rim, material originally deep below the progenitor impact's center. Yet another opportunity presents itself for future geologists to take advantage of a ready-made excavation [NASA/GSFC/Arizona State University].
A closer look at the crater straddling the Straight Wall at 21.6°S, 352.2°E, The character of each half of the plain divided by the rift appears to be similar. Also, at this point in the montage consisting of the right and left frames of LROC NAC M122264663, their overlapping fields of view are joined very close to the location of the rift, so subtle differences in hue might be mistaken for a true appearance [NASA/GSFC/Arizona State University]. 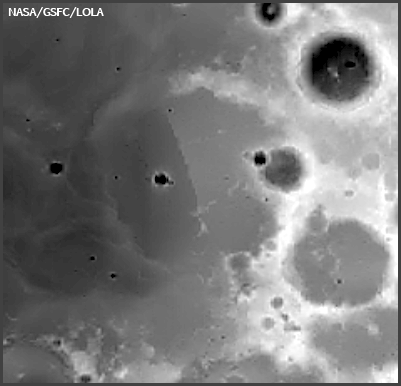 Preliminary, low-resolution LRO laser altimetry (LOLA) data clearly picks up the half-kilometer difference in elevations of the plain on either side of Rupes Recta [NASA/GSFC].
Posted by Joel Raupe at 6:41 PM

emergency. So if you find yourself short of cash
Click Here

Not bad! You've posted a lot of information here.