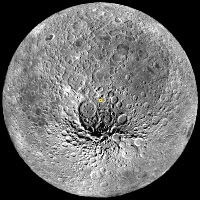 The surfaces of the ponds show polygonal patterns of fractures that likely formed as the melt cooled and solidified (and thus shrank). The organized pattern of boulders (looking somewhat fence like) formed along a flow front.

Since these lines of boulders rest on top of impact melt rocks they show that melt was splashed out at least two times during the crater forming event.

The later splashes barely made it out of the crater and flowed only a short distance. What caused this last splashing of melt? Perhaps a large landslide on the interior wall fell into a lake of melt at the bottom of the crater and caused a big splash.

Short melt flows are common around lunar craters -- they tell a tale of the incredible forces unleashed during cosmic collisions. These same events happen as often on the Earth as the Moon. But why do we see so few impact craters on the Earth? Earth has a lot of resurfacing (erosion, weathering, volcanism, plate tectonics), and weathering or resurfacing on the Moon is a lot slower. Thus, more craters and melt deposits are preserved on the Moon.